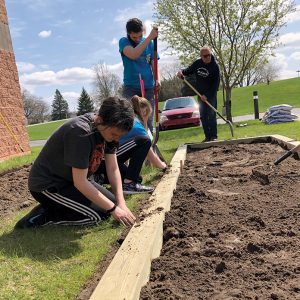 There’s a certain buzz in the air around many of Wisconsin’s electric cooperatives, and it’s hovering around the pollinator gardens that have been popping up on co-op properties throughout the state.

At some co-op headquarters, traditional floral landscaping and stretches of sunny green lawn have been replaced with native pollinator plantings that are just coming into bloom. Often tended by co-op employees, these plants attract the pollinators—including bees, butterflies, and birds—that are needed for the reproduction of about one third of all human food crops, as well as 75 percent of flowering plants, according to pollinator.org.

Establishing these small-scale pollinator conservation projects on site is just another way for electric cooperatives to practice good stewardship, according to Bruce Ardelt, CEO of Oakdale Electric Cooperative. Oakdale is one of several Wisconsin electric co-ops serving as home to a brand-new pollinator garden.
“We’re always trying to do the best we can to improve the environment,” he said. “We do it in our day-to-day operations, but here’s another small thing we can do that will help the monarch population.”

Plight of the Pollinators

Pollinator numbers have been dropping for years due to habitat loss, land management practices, and weather occurrences. Beekeepers have reported declining bee numbers since the 1990s, and monarch counts have fallen dramatically—by more than 80 percent—over the past 20 years, according to the Center for Biological Diversity.
Attention to the dwindling numbers has intensified in recent years. The U.S. Fish and Wildlife Service was petitioned to add monarch butterflies to the endangered species list in 2014, with a species of bumblebee designated as endangered in 2017. Conservation efforts have since increased in many corners, with electric utilities among the industry groups that have stepped up. 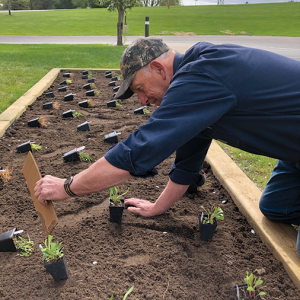 Because they manage millions of acres of habitat, including power line rights-of-way, solar and wind installations, and acreage around substations, electric utilities are uniquely suited to support the conservation of monarchs and other pollinator populations.

Electric co-ops are among the utilities that have formed partnerships to promote restoration of pollinator habitat along the acreage they manage. Steve Freese, CEO of the Wisconsin Electric Cooperative Association, first reported in July 2016 on the statewide association’s partnership with the Sand County Foundation to encourage monarch habitat restoration efforts. Discussions at industry gatherings since held throughout the state have focused on the various ways electric co-ops can help, whether by planting milkweed, the only viable food source for monarch caterpillars, along utility rights-of-way; planting pollinator habitat gardens along community solar installations; or partnering with other local groups such as FFA organizations to restore habitat.

It was at just such a gathering where Deana Protz, public relations & communications specialist at Oakdale Electric Cooperative, got to thinking about how her co-op could do its part to help monarchs and other pollinators. Oakdale Electric had an ideal spot on its property, with a south-facing slope near the front door of the building where a garden would be visible and, she hoped, inspire others.

Protz worked with the Monarch Waystation Program in planning the co-op’s garden. The program provided expert help in selecting hardy native plants that would thrive in the area’s sandy soil. With help from fellow employees and volunteers from the Tomah High School Roots and Shoots Science Club, two pollinator flower beds with 96 plants were established on Oakdale’s property this past spring. Oakdale Electric is currently the only electric utility in Wisconsin to be registered as a Monarch Waystation in the program’s registry, and only the second electric co-op in the entire country to be registered.

“We had to hit some criteria in order to be certified,” Protz explained. “There are requirements for size—the garden needs to be at least 100 square feet—with correct exposure and proper sunlight. You also need to have at least 10 milkweed plants, at least two different species, and you often need to provide a variety of nectar plants as well—milkweed for the caterpillars and nectars for the butterflies. We thought it was valuable to go through the registration process to make sure that our garden was effective.”

She said the Roots and Shoots volunteers will continue to help with the garden’s maintenance, but thanks to the plants’ sturdy nature, maintenance should be minimal once the garden is established. 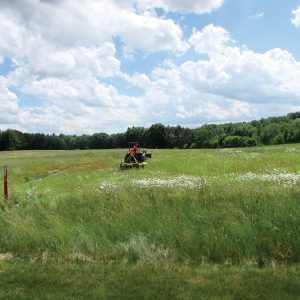 What I’ve learned through this whole process is to go with just native plants,” she said. “They’re hardy and designed to thrive in our area. They don’t need fertilizer—just rainwater. They’re just really great plants for a business because they are low maintenance, so there’s a cost savings there as well.”

With the young plants just beginning to bloom, the garden is already attracting pollinators. It’s also attracting questions from curious onlookers, which is exactly what Protz had hoped for.

“We specifically put the garden next to the front door so it’s not out of mind,” she said. “It’s close and accessible for employees and members to view.”

In fact, Oakdale’s garden has led to at least one more registered Monarch Waystation. Protz recalled a conversation she had with a member who asked about the garden. Protz supplied the woman with information about the Monarch Waystation Program, and the member went on to create a registered garden herself. Protz said she hopes the co-op will eventually be able to help other businesses or schools start their own pollinator gardens. For now, she said she’s just enjoying watching Oakdale’s garden grow.

ing the garden bloom and get fuller as the summer continues, and seeing all the color and the butterflies,” she said. 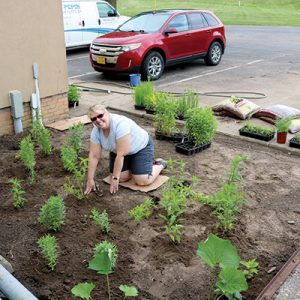 A little farther north, a similar project has been blooming. The front doors of Pierce Pepin Cooperative Services’ (PPCS) headquarters building in Ellsworth used to be flanked with colorful annuals. This past spring, those areas were filled with pollinator-attracting perennials instead.

By mid-summer, a crew of PPCS employees added another larger bed of pollinator-friendly plants—this one just over 400 square feet—to the other side of the building.

PPCS was fortunate to have had someone with experience right on staff to take the lead in designing and planning a pollinator garden. Member Relations Technician David Chavie keeps a pollinator garden at his own property and was happy to spearhead a similar project at the co-op.

“It dovetails nicely with my own interests, so I jumped at the chance,” he said. “I think it’s a great idea.”

He designed PPCS’ gardens with 230 individual plants of at least 16 different types, including two different species of milkweed. Some of these plants came from Chavie’s own garden at his house. Like those at Oakdale Electric, PPCS’ plants are hardy and should require little maintenance once they’re established. 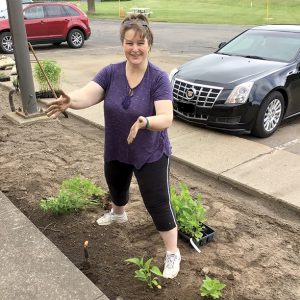 “Hopefully, if all goes right, this will just be a springboard to doing even more in the coming seasons,” he said.
In addition to establishing its own garden, PPCS encouraged its members to get involved in pollinator habitat conservation through a special Earth Day promotion this past April. The co-op gave away free “bee bombs”—bundles of pollinator-friendly wildlfower seeds from Plantables—to any interested members who stopped in the office.

At Central Wisconsin Electric Cooperative in Iola, plans call for developing educational opportunities presented by the co-op’s newly planted butterfly meadow. CWEC tapped into the expertise of the Sand County Foundation to create a pollinator habitat on about an acre of land surrounding the office building, with assistance from Prairie Nursery Inc. in selecting the best plants for the soil type.

The first step of this project was to restore the previously unmanaged grass and weeds that had grown along this acre. The site was then seeded with a diverse native seed mix designed for monarch butterflies.

The project is now in its second growing season, with colorful wildflowers expected by next year.

“We are very excited to be participating in the program and look forward to our field being a very successful habitat for monarch butterflies, bees, and other pollinators,” said Member Relations Coordinator Brenda Mazemke. “We eventually want to create walking trails and information kiosks about the benefits of pollinators and the plant species.”

At Clark Electric Cooperative in Greenwood, a pollinator habitat restoration project is doubling as an outdoor classroom for some area high school students. The co-op donates land for the Greenwood FFA Chapter to use as a crop test plot, and this past spring, Greenwood FFA members planted about 400 native pollinator-friendly flowers there. According to the Loyal Tribune Record Gleaner, the plants were purchased with a $1,000 Pollinator Habitat Grant the Greenwood School District received.

The project is providing a wealth of hands-on teaching opportunities. FFA Advisor Loghan Hallett told the Tribune Record Gleaner that the students first checked drainage and wind direction on the plot to determine the most effective placement of the plants, for both the crops’ and the pollinators’ benefit. The students have continued to nurture the plants throughout the summer, watering and weeding until the plants are well established, at which point they should thrive on their own. 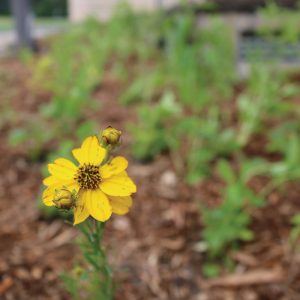 Of course, supporting pollinator habitat has long been practiced in the electric cooperative world. Dairyland Power Cooperative, the generation and transmission co-op that supplies wholesale power to 24 electric distribution co-ops including 18 in Wisconsin, established its first pollinator plot back in 1994, long before diminishing pollinator populations were widely recognized. That initial project, completed with the help of Prairie Restorations, entailed sealing the cap of a coal-ash landfill at Dairyland’s Genoa site with a pollinator meadow, according to Brad Foss, manager, environmental impact at Dairyland.

In recent years, Foss said, Dairyland has launched a number of other pollinator projects, some of which have been facilitated by the G&T’s growing solar initiatives.

Dairyland acquires energy output from 18 utility-scale solar generation facilities that are sited in the service areas of 13 Wisconsin electric cooperatives and one in Iowa. The generation and transmission co-op has worked with Prairie Restoration in seeding the sites with a mix best suited for each area to create certified pollinator gardens. Among the 18 solar arrays, these sites are providing about 250 acres of pollinator habitat, he said. 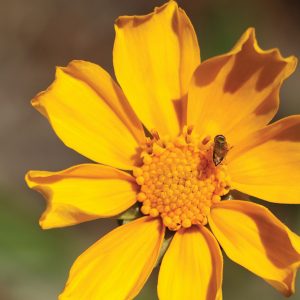 In addition, Foss said Dairyland is evaluating the substations in its system to determine which pieces of land buffering the substations would be suitable for developing one- to two-acre pollinator meadows. He said three have so far been identified and seeded, two of them in Wisconsin. The areas are chosen for their visibility as well as the land suitability.

“We’re looking for substations closer to municipalities or a subdivision. One is actually closer to a park,” Foss said. “That way we can use a pollinator plot as an educational tool as well, and put up some signage that explains what a pollinator plot is, and why we’re doing it.”

With projects big and small, electric co-ops are doing their part to keep the pollinator buzz going .—Mary Erickson