With phase one of the 2018 midterm elections behind us following the August 14 primary, phase two, the general election, is officially underway. And almost needless to say, the speculation about what will happen both nationally and in Wisconsin has been running at full throttle practically since the polls closed in November 2016.
Is there a blue wave coming? If so, will it be a tidal wave or a ripple? No matter what the answer, we’re all figuratively sitting on the beach where we’ll feel the full effect of whatever happens.

Two potentially high-impact Wisconsin elections are those for the United States Senate seat currently held by incumbent Democrat Tammy Baldwin and the race for the governor’s office. As a result of the August primary, Baldwin faces a challenge from Republican State Senator Leah Vukmir, and incumbent Governor Scott Walker will square off with Democratic challenger Tony Evers, currently the state superintendent of public instruction.
Last month’s magazine brought you a feature story about the “Co-ops Vote” program initiated by the National Rural Electric Cooperative Association, stressing the importance of rural voices being heard in elections. This month I’ll try to thread the needle between nagging on the subject, and delivering a useful reminder about the citizen’s duty of participating in elections by voting.

Neither this magazine nor the Co-ops Vote program will ever try to tell you who to vote for. We will keep encouraging you to take the time to get to know where candidates stand on co-op-relevant issues so you can make informed decisions about who you believe likeliest to be on your side when policy choices affect your electric rates and electric system reliability.

A number of Wisconsin electric cooperatives will be holding forums and debates this fall with state and federal candidates, giving you the opportunity to see and question them face-to-face. This is important not just for the obvious reason that you can judge for yourself who you think will be your ally in public office; it also delivers a message to candidates and incumbents alike that it would be a mistake for them to ignore the substantial population of co-op voters who, as we’ve noted previously, tend to “punch above our weight” on election day. 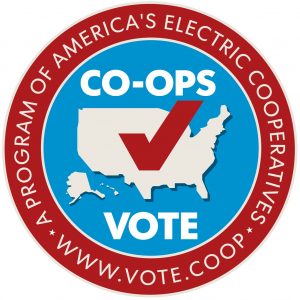 I would encourage you to take a little time and participate when you hear of a co-op candidate forum in your area.
It’s well understood that many people are angry or disillusioned because they’ve disliked the results of one election or another in recent years. But whatever your partisan preferences may be, it’s important to understand you probably aren’t going to make things better by walking away. Candidates expecting high levels of voter participation should realize their chances of winning lie with appealing to a broad majority, and shrink if they try to run on the support of a narrow fringe.

The hard-working people of rural America—co-op country can and should have a major impact by turning out to put our top issues high on the national agenda.