“These things are cool!” Roger Wiff said after taking his first spin in a Chevy Bolt. Wiff, a board member for both Pierce Pepin Cooperative Services and the Wisconsin Electric Cooperative Association, made a living driving big diesel-burning semi-trucks with lots of horsepower, and he has joined the fast-growing group of electric vehicle (EV) fans.

The number of electric vehicles on the road in Wisconsin has doubled both of the past two years, to about 10,000 in 2020, but that is still less than 1 percent of cars on the road. Still, as technology improves and the cost of EVs is dropping, BloombergNEF expects they will account for 10 percent of passenger vehicle sales by 2025 and more than half of all new vehicles by 2040. The surge comes in part because the price of EVs is dropping. Due to lower battery costs, analysts predict some new EVs will rival the cost of some gas-powered vehicles, at about $25,000, by 2023.

“EVs are the future,” said Nate Boettcher, president and CEO of Pierce Pepin Cooperative Services. “GM just changed their logo and has basically told the market, they are all in. Ford is coming out with their Mach-E this year and the F-150 next year. GMC sold out of the Hummer EV in 10 minutes. I am not aware of a single major manufacturer that hasn’t retooled and begun positioning for the EV future. It’s a great, great opportunity for us as co-ops to create additional value for the service we provide.”

Based on that knowledge, Boettcher spearheaded the just-launched program known as “Charge EV” and almost every Wisconsin electric cooperative jumped on board. Through Charge EV, the co-ops are installing co-op-branded public-use Level 2 and Level 3 chargers and offering in-home chargers that have intelligence built in to allow for load control and time-of-use rates. Working with ZEF Energy, a company that specializes in smart transportation electrification technology, the co-op-branded “smart chargers” can provide additional data to the utility. They also have revenue grade metrology, so members don’t need an additional meter to take advantage of co-op incentive rates.

“The smart charger technology is key,” said Byron Nolde, CEO of Oconto Electric Cooperative. “We will be able to offer members a special rate if they charge their vehicles at night, which helps us with load control and helps them save money.” Oconto Electric recently added an electric vehicle to its fleet that employees and board members can drive for a week at a time to get the feel of what it’s like.

The goal of the Charge EV program is to help ease the transition to EVs and address range anxiety by building a grid of co-op-branded charging stations and offering a virtual map for drivers to access, which Brian Zelenak, president and CEO of St. Croix Electric Cooperative, sees as a big benefit. “What if you want to take your EV to the cabin for the weekend, or drive north to see the leaves change? Are there charging stations in those rural towns? Do you know where they are? With Charge EV, you will now have access to a brand you can trust.”

“To eliminate range anxiety is an important reason we went with Charge EV,” Bayfield Electric Cooperative CEO Diane Berweger said. “Also, by offering the same charger to each member, we all will have the same knowledge when a member calls on the cooperative for advice.”

Berweger says Bayfield Electric has a strong renewable membership base, which is another driving force behind the transition to EVs. As utilities reduce emissions by increasing renewable energy sources and shuttering more coal plants, the transportation industry is now the top contributor of carbon emissions in the nation. In a recent survey, half of the Bayfield Electric membership expressed interest in owning an electric car within the next 10 years.

Steve Stroshane, Polk-Burnett Electric Cooperative general manager, says they already have dozens of members who drive EVs, so they already offer charger rebates and they are looking to build on that with the Charge EV program. “Moving from gas to electricity reduces pollution, and the gap improves as the electric grid gets greener,” he said. “Polk-Burnett supports EV owners and looks forward to changing the way rural Wisconsin fuels transportation.” 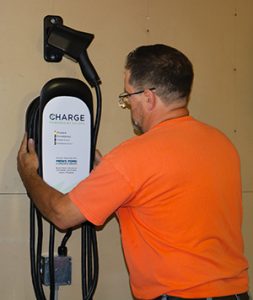 The Charge EV network launched with a group of 29 electric co-ops, mostly in Wisconsin, but also Illinois, Iowa, and Minnesota. Boettcher envisions the program growing to be a nationally cooperative effort.

“We believe co-op members will appreciate they can charge with another community-owned and co-op-supplied EV charger,” Boettcher said. “It’s sort of like buying your cheese from local creamery instead of going to Wal-Mart when you visit your family out of state. You are supporting local business by charging on a co-op’s lines, and we believe this will have an appeal to members of electric co-ops.”

Charger locations and other information can be found at www.charge.coop.—Julie Lund