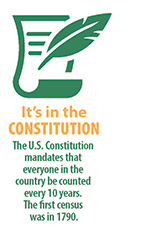 Did you know the third United States President, Thomas Jefferson, directed the nation’s first census in 1790? Fifty years later, in 1840, the Census Act authorized the establishment of a centralized census office and in 1902, the office became a permanent organization within the Department of Interior. Today, the U.S. Constitution requires that everyone in the country be counted every 10 years. The census is administered by the U.S. Census Bureau, a non-partisan government agency. Wisconsin’s electric cooperatives understand the importance of the U.S. census and encourage every co-op member to participate.

What is the Census?

The 2020 census counts every person living in the 50 states, District of Columbia, and five U.S. territories. However, the census is much more than a head count. It provides a picture of the nation that helps determine where to build new schools, hospitals, and businesses; how federal funding is distributed; and how congressional seats are apportioned. It also helps to evaluate how communities have changed over time. An accurate count is vital.
The year of 2020 will bring a unique change to the census as it is the first time the U.S. Census Bureau will accept responses online. Additional options will continue to be offered, such as responding by phone, by mail, or even in person, if needed.

Why is the Census Important?

Participating in the census is a civic duty. It’s a way to contribute to the democracy and say, “I count.” Every 10 years, the results of the census are used to reapportion the U.S. House of Representatives, determining how many seats each state gets. It’s also a way to determine how federal funds and grants are dispersed to support states, counties, and communities to benefit schools, hospitals, roads, and public works.
Local governments use the census data for public safety and emergency preparedness plans, and businesses consult the data to decide where to build factories, offices, and stores, which creates jobs and fosters economic development. What’s more, real estate developers use data from the census to build new homes and revitalize old neighborhoods. Local residents evaluate the data to support community initiatives involving legislation, quality of life initiatives, and consumer advocacy efforts.

How Do I Complete the Census?

For the first time, the census will be accessible online and available in English as well as 12 additional languages. Invitations to respond to the census will begin in mid-March. The online questionnaire will follow latest web accessibility guidelines and a video in American Sign Language will be available. The census can also be completed by phone in English and in 12 additional languages. The official census day is April 1, 2020. By then, every household should receive an invitation. By mid-April, a paper questionnaire will be mailed to every household that has not yet responded online or by phone. If necessary, participants can also respond in person beginning in mid-May. Census takers will visit all households that have not yet responded. Strict federal law protects census responses. It is against the law for any census bureau employee to disclose or publish any census information that identifies an individual or business. The Census Bureau will never ask for your Social Security number, bank or credit card account numbers, money or donations, or anything on behalf of a political party.
By March 2020, the public can begin responding to the 2020 census online. To make sure you and everyone you know is counted, visit www.2020census.gov.
—Courtesy of Oklahoma Association of Electric Cooperatives