In just one year we go to the polls to vote for president and other state and federal elected offices, and with this in mind, electric cooperatives across the country are conducting some unique activities. Wisconsin’s statewide co-op organization is planning to mirror them in hopes of growing voter turnout in our state’s rural areas.

While we are working on turnout we will also be asking candidates for state and local offices where they stand on one basic issue concerning reliable electric power for rural Wisconsin.

Two interesting co-op initiatives will be melded into one. The first is “Co-ops Vote,” a program developed by the National Rural Electric Cooperative Association and focused on building voter turnout in electric co-op service areas. The program never tells anyone who to vote for; co-op member-owners are completely capable of making their own choices. What the program does do is help ensure co-op members are well-informed about candidates’ positions on energy issues.

The second initiative originated in our neighboring state of Iowa. The Iowa caucuses bring the first balloting of the presidential primary season. With the Freese family farm just across from Dubuque, we’re keenly aware of the campaign activity on the other side of the Mississippi River.

Our western neighbors at the Iowa statewide co-op association capitalize on their first-in-the-nation opportunity to affect the selection of party nominees. They’ve created a program called “Rural Power,” and it’s pretty straightforward: Volunteers put on green Rural Power T-shirts and gather at presidential caucus events to ask one question, The Energy Question, and it’s simple. The energy question posed to presidential candidates is, “How will your energy plan help provide affordable and reliable power to rural Iowa?”

I think this is brilliant in its simplicity: It compels those competing for votes nationally to address concerns about shifting energy costs to co-op member-consumers and policies that make energy less affordable. Affordability, reliability, even the safety of co-op workers and members can be affected by polices relating to issues like cyber and physical security threats to the electric grid, or emergency assistance following tornadoes or other natural disasters. 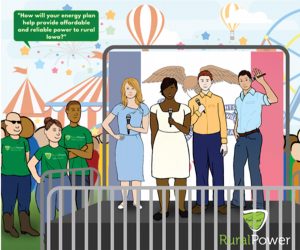 We’re planning to combine Co-ops Vote and Rural Power to better fit Wisconsin and help show our strength in numbers by participating in both state and federal candidate events and forums. As candidates travel throughout our cooperative service areas during the coming 12 months, members of your cooperative will be doing three simple things. They’ll put on the matching shirts that identify Rural Power and the Co-ops Vote program, they’ll attend campaign events to make the strength of their numbers visible, and they’ll ask our own energy question.

I’ll repeat that this is not an effort to tell people how to vote. We don’t endorse candidates. But it could be more important than that, as an organized effort to help greater numbers of voters clearly understand how they can expect a candidate’s views to affect their cooperative’s ability to provide affordable, reliable power for rural Wisconsin’s homes, farms, and businesses.

It’s good to exercise the right to vote. It’s even better when voters are well-informed.