Ever since member-owned electric cooperatives were created decades ago, the annual meeting has been about more than just business. It’s a time for members to come together to network and brainstorm, to eat and to chat, to catch up with friends and neighbors, and to just be together. For many co-ops, it is an event that members look forward to year after year.

“We just like to participate,” said Gary Patch, member of Richland Electric Cooperative. “It’s in our best interest.”

It’s also required by law, and bylaws, that electric cooperatives hold annual meetings, to ensure members are informed and have an opportunity to voice opinions about operations, and to elect and seat new board members. But this year, that requirement is in direct conflict with guidance intended to stop the spread of COVID-19. Large gatherings violate social-distancing rules and could put members at risk, so many in this safety-focused industry have been seeking alternatives.

“I like to see and talk to our members,” said Steve Lucas, CEO of Scenic Rivers Energy Cooperative. “We usually have a meal and socializing. We’re not going to be able to have that this year, and I know some people will be disappointed.”

Co-op staff guide members to a “no contact” check in.

Richland Electric Cooperative took a unique approach for its 84th annual meeting and held a “drive-in” style event at the service center April 25. Members registered with postcards as they pulled in, lineworkers directed cars to parking spots in the lot, and co-op Board President Calvin Sebranek and CEO and General Manager Shannon Clark presented the meeting from bucket trucks. The meeting was broadcast live on the local radio station, WRCO. Motions and voting were done by honks of the horn, and members showed respect during the national anthem by turning on their headlights.

Richland Electric members go through a “no contact” check-in for the meeting.

“I think it came off really well,” remarked Pat Turnipseed, a member who attended with her husband. They were among 150 other cars and trucks parked in the lot long before the meeting started. The first attendees showed up before 8 a.m. The meeting started at 10.

“I’m really impressed with how organized it is!” said member Jean Patch.

“Bigger turnout than I expected,” added John Anderson. “And it sure is nice to get away from home for once.”

There are several factors that allowed Richland Electric Cooperative to pull off the drive-in meeting. The co-op produces a comprehensive publication that is shared with members ahead of time, and voting is done by mail; the co-op has a property that allows for this type of gathering; the service area is in one county; and Richland Center is the center of commerce, making it a reasonable location for all members to travel to.

Members Jean and Gary Patch remain in their vehicle during the meeting.

Clark said any concerns about reaching a quorum quickly dissipated when the cars started filing in. While there were no hugs or handshakes, he said just being able to see the employees and members was emotional.

“We’ve been at this since March 17, St. Patrick’s Day, not just social distancing, but isolation, really,” he said. “Personally, I didn’t realize how much I would miss the interaction. Driving in today, I saw a lineman bringing in the bucket truck, and then got here and saw our operations manager and three or four more people, and it’s kind of like a homecoming. I have so much respect for the people who work for Richland Electric Cooperative, and to be back together, even at a distance, I’ll bet we won’t take that for granted in the future—I know I won’t!”

At Taylor Electric Cooperative, President and CEO Ken Ceaglske says they are still hoping to hold their annual meeting as usual in June, but a similar “drive-in style” is the back-up plan.

“Members would drive in, get a packet with ballots, notecards for questions, a pen, and coupons for giveaway items at the local grocery store,” Ceaglske said. “The next stop would be an exchange of executed ballots for a ‘to-go’ dinner that they can have in their car. We will get them parked and use the local radio station to broadcast the meeting. A second round of voting will take place once everyone is parked, with employees collecting the ballots from the parked cars.” 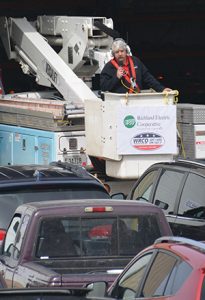 The meeting format is not the only change for Scenic Rivers members prompted by the pandemic. Lucas told those participating on the virtual platform that following a cost-of-service study years in the making, the co-op was planning to announce a modest rate adjustment. Due to the economic impact of shutdown, they have now opted against it.

“We’re gonna tighten our belts, and not do a rate adjustment, because of what our members are experiencing,” he said.

Riverland Energy Cooperative is also considering a virtual meeting, but holding out hope that they will be able to hold the meeting in conjunction with Member Appreciation Day later this summer, if possible.

Steve Lucas of Scenic Rivers Energy Cooperative says in planning for this year’s annual meeting, and all of the changes brought on by the pandemic, “everyone has stepped up.”

“My challenge to all employees is that members should not feel any changes,” he said. “Our biggest challenge is to keep all employees and members safe. I can replace equipment, trucks, and transformers; I cannot replace our dedicated employees.”

Scenic Rivers used to be three separate cooperatives that merged, and it covers a vast area, so a virtual meeting makes the most sense, Lucas says. The co-op is using the Perigon platform, which has methods to track attendees.

The meeting format is not the only change for Scenic Rivers members prompted by the pandemic. Lucas told those participating on the virtual platform that following a cost-of-service study years in the making, the co-op was planning to announce a modest rate adjustment. Due to the economic impact of shutdown, they have now opted against it.

“We’re gonna tighten our belts, and not do a rate adjustment, because of what our members are experiencing,” he said.

Riverland Energy Cooperative is also considering a virtual meeting, but holding out hope that they will be able to hold the meeting in conjunction with Member Appreciation Day later this summer, if possible.

General Manager Jerry Sorenson says the greater challenge is helping members navigate this challenging time. “Since a cooperative is a collection of members for a purpose, when any member is hurting, the cooperative is hurting,” he said.

Some co-ops are pushing back their annual meetings until a time when it is appropriate and safe to come together again. Washington Island Electric Cooperative is tentatively planning to hold a meeting in August, in the hopes that their many seasonal members will be able to participate.

“We would like to keep things traditional; however, we are not locked into this,” said Manager Robert Cornell. “We will see what the requirements are at that time and make a determination if an alternate venue is required.”

Not Happening This Year

While co-op leaders across the state all say they prefer the traditional, in-person meeting, at least one co-op has announced that the meeting just won’t happen this year. The board of Pierce Pepin Cooperative Services decided, in the interest of safety, and so as not to disenfranchise members without broadband, there won’t be an annual meeting in 2020.

“This is an unprecedented time,” Boettcher said. “Our greater fear is that we endanger our members and guests.”

“The uncertainty of when we would be able to hold and having a facility that would allow us social distancing were major concerns,” said Nate Boettcher, president and CEO. “We also lack broadband, so having a meeting remotely would also be challenging, and we run the risk of alienating members who don’t have access to broadband or internet-capable devices.”

Boettcher said the co-op doesn’t have any contested elections this year, and they’re covered by their bylaws in the event they cannot have an annual meeting.

“This is an unprecedented time,” Boettcher said. “Our greater fear is that we endanger our members and guests.”

Some Pierce Pepin members, like others all over the state, expressed disappointment in the altered annual meeting plans, not only because these events often offer free meals, door prizes, and scholarship awards along with the camaraderie.

Speaking from her car at the Richland Electric drive-in event, Jean Patch summed it up: “We all come because we just have a whole lot of folks here who care.”