I love December in Wisconsin, as our family makes preparations for Christmas. It’s a special time for my family and I suspect for yours as well: a time for reminiscing and storytelling at family gatherings.

For us, it also means a time for preparing family recipes and meals based on traditions handed down through more than 140 years. I remember how excited I was as a boy going to my grandma’s house to help decorate her Christmas tree. Grandma’s decorations were unlike any I’d seen. She had two distinct types of ornaments. Some were brought along when the family emigrated from Germany. Small clips held candles and there were mirrored ornaments painted with Christmas scenes. There were also traditional glass bulbs brought from Germany and a manger scene with farm animals Grandma’s brother Val had as a child. The treetop angel was from her mother Mathilda, also from Germany.

I remember asking Grandma about the mirror ornaments and candleholders. She told me that for the first 50 years of her life, she and her family had no electricity so they’d put a small white candle in each holder and it would be lit on Christmas Eve just before they went to midnight mass. With the mirror ornaments reflecting the candlelight and illuminating the room, they would say a prayer, blow out the candles, and head for mass. The second set of ornaments dated from 1928 (the year of my grandparents’ marriage) through the 1950s, and they included bubble lights. I thought Grandma was the only person in the world who had those magical lights since I couldn’t find them anywhere else.

Growing up I spent as much time with my grandparents as with my own parents since we all lived together on the farm. The only thing between my house and my grandparents’ was the granary and the summer kitchen. I relished all the old stories and traditions of the holidays that Grandma and Grandpa shared with me. They were very special people to me, and 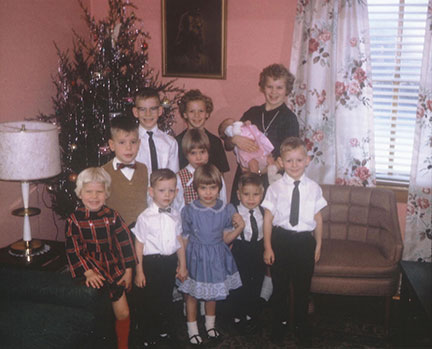 Steve Freese (tan vest), his sister, and cousins stand in front of his grandmother’s Christmas tree.

I feel so privileged that almost all the ornaments they put on their tree are now on mine, including the 100-year-old angel at the top and the manger beneath the tree.

And yes, the bubble lights. After almost 30 years, only one of Grandma’s remained. It was distinctively different from all the others: red and blue with embossed stars and blue liquid inside. It turns out this bubble light was made the same year we got electricity on the farm. It could be taken apart and a new bulb put in so it would never wear out. Along with the German ornaments the family brought with them, it’s on our tree every year. And thanks to eBay, more than 100 bubble lights now keep company with Grandma’s sole survivor.

Christmas time is a special chance to enjoy our families, live out our traditions, enjoy the family recipes that go with them, and help create new childhood memories for our kids and grandkids. In that spirit, I want to
share two very special family recipes with you. One came with our family from Germany and is my Grandmother Freese’s recipe. It’s for cut-out cookies, and making them was quite a production. She would always make the dough and cut out the cookies. Her niece would make a special icing that they would apply to each cookie with paintbrushes. The finished cookies looked so good you didn’t want to eat them. (I thought the silver balls used to decorate the cookies were BBs so I wouldn’t eat them anyway.)

The second recipe is for my mother-in-law’s ginger snaps. These are my two favorite Christmas recipes, and I hope you enjoy them as much as I do. Whether you and your family gather to celebrate the season of peace by lighting candles on a menorah or bubble lights on a Christmas tree, I wish you the very best this Hanukah and Christmas season and hope you have a very happy New Year.

In large bowl, beat shortening and sugar with electric mixer on medium speed until creamy. On low speed, beat in eggs, milk, and vanilla. In a separate bowl, mix baking powder, baking soda, salt, and flour until well blended. Gradually stir dry ingredients into wet ingredients. Shape dough into a disk and wrap in plastic.

Chill dough for 1 hour before rolling out and cutting with cookie cutters. Bake 8-10 minutes at 350 degrees.

Beat the meringue powder, confectioners’ sugar, and water with an electric mixer until the icing forms stiff peaks, 10-12 minutes at high speed. Mix food coloring of choice into icing. Apply icing to cooled cookies with small paintbrush or squeeze bottle.

Preheat oven to 350 degrees. Cream sugar and shortening together. Add egg and stir in molasses. In a separate bowl, mix flour with salt, baking soda, and spices. Add dry mix to creamed mix gradually, stirring as you go. Roll into walnut-size balls. Roll in white sugar and bake on greased cookie sheet 8-10 minutes. 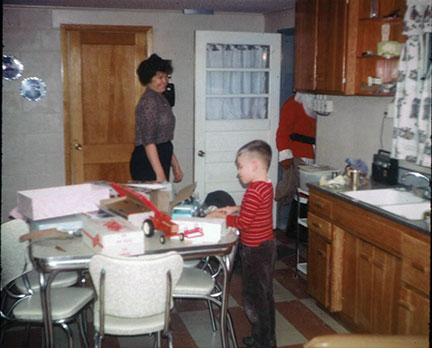 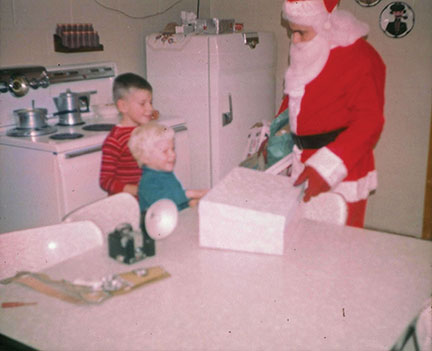