The pandemic that continues to grip the state and much of the nation is shining a bright light on a big problem—lack of high-speed internet service in many rural areas. At a time when virtual schooling, working from home, and telemedicine have become the norm almost overnight, those without broadband access are simply left behind. It’s similar to the fight many farmers took on more than 80 years ago—when those living in urban areas had access to electricity, but rural residents did not.

“If you think of all the things we’ve been able to see the need for broadband, it’s there all the time whether it’s distance learning, whether it’s telemedicine, or even the opportunity to be able to create a business or do your banking. It’s important to have broadband access for folks to be able to do that, especially in the last six months as we’ve seen the need for that,” USDA Under Secretary for Farm Production and Conservation Bill Northey said at a stop at Chippewa Valley Electric Cooperative in Cornell last month, noting that of the 21 million Americans who do not have high-speed internet access, 80 percent of them live in rural areas. 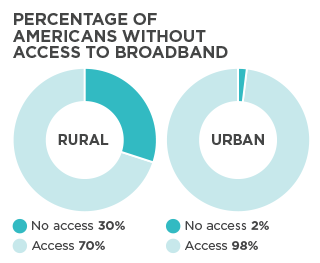 Back when the prospect of electrifying homes and businesses was still fresh and new, the country’s first hydro-electric power plant came online—in Appleton, Wisconsin. The Vulcan Street Plant powered the paper mill, and the home of the mill’s owner. The year was 1882.

It was the first of many electrification firsts in the Badger State. In 1937, Richland Electric Cooperative was among the first co-ops formed to bring electricity to rural members. Wisconsin was the first to form a statewide association to represent rural electric cooperatives, and the early version of this magazine was the nation’s first statewide publication for members.

While there are many parallels between rural electrification and broadband expansion, in Wisconsin, we are still getting up to speed on the latter. According to broadbandnow.com, which tracks high-speed internet access by state, Wisconsin is 30th in the nation. 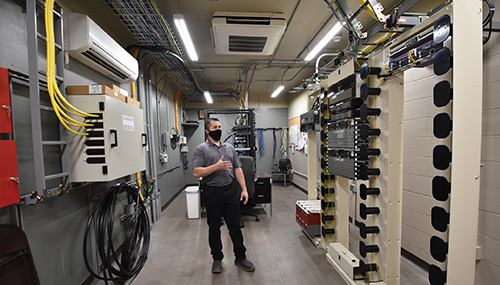 The federal program that first offered loans to rural electric cooperatives back in the 1930s was born out of effort to rebuild the economy following the Great Depression. Similarly, federal and state governments are now infusing new pandemic recovery funds into efforts to help bridge the broadband gap and faster connect those in rural areas.

But it won’t be cheap. By one measure, the Federal Communications Commission estimates it will cost $40 to $80 billion to expand service to millions of Americans living without access, mainly in rural areas. The federal Rural Digital Opportunity Fund allocates $16 billion to the cause, and 42 states including Wisconsin have made broadband expansion investments this year, fueled by the need exposed by the pandemic.

Governor Tony Evers announced in September more than $5 million in federal CARES funding for broadband expansion. This is in addition to $48 million that was included in the 2019–21 state budget.

Members to Benefit from Funds

“…our mission really is economic development, innovation and technology, workforce development, and quality of life, but of course our overarching mission is e-connectivity with broadband,” said Frank Frassetto, USDA Wisconsin state director, at the gathering held at Chippewa Valley Electric Cooperative to celebrate the USDA investment in Ntera. “It touches every single aspect of our life. And I think we all know, especially since March, that robust broadband is a necessity. It’s not an amenity.” 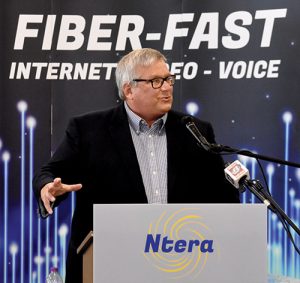 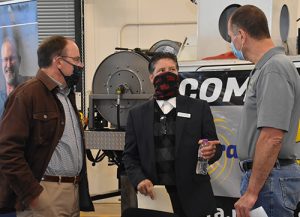 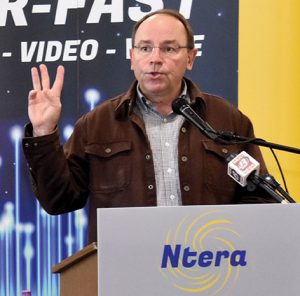 (Left) Under Secretary of Farm Production and Conservation Bill Northey visited Chippewa Valley Electric Cooperative (CVEC) last month as the USDA announced a $3 million grant awarded to Ntera for broadband expansion. (Center) Also speaking at the event were (left to right) Tom Tiffany, U.S. representative for Wisconsin’s 7th Congressional District; Frank Frassetto, Wisconsin state director of the USDA’s Rural Development Program; and Russ Falkenberg, CVEC’s director of IT and member services and a member of Ntera’s board of directors. (Right) Tiffany listed rural broadband as one of his top three issues, noting that 15 percent of children who are attending school virtually do not have sufficient broadband, and many of them are from rural areas. He also pointed out rural broadband’s potential as an economic development tool. “For many people it does work for them to work from home now, and if we get them those good broadband connections, like Ntera’s is going to do, it is a huge economic opportunity for us in northern Wisconsin,” he said. “Let’s capitalize on that. ”

In the spirit of Wisconsin’s history of innovation and action, and thanks to the determination of board members and leadership at Chippewa Valley Electric Cooperative and Citizens Connected, Ntera extended service to its first member in Holcombe less than a year after it was formed in 2018, and since then has exceeded expectations, hitting five-year goals in just three years. Today Ntera serves more than 760 homes and businesses, and is adding more accounts each day.

The latest grant will enable the co-op to connect an additional 746 households, 33 farms, and 33 businesses to high-speed broadband internet in Chippewa, Rusk, and Taylor counties in Wisconsin.

“With this grant, we will continue to expand our fiber-fast services,” said Russ Falkenberg, director of IT & member services at Chippewa Valley Electric Cooperative. “We’ve worked closely with our neighboring electric cooperatives and growth could not be possible without the support of good people like Lynn Thompson from Eau Claire Energy Cooperative and Jim Anderson from Jump River Electric Cooperative. There has also been a tremendous amount of support from the community, local townships, municipalities, individuals, some of whom are here today. Because of all their support, our plan is coming together.”