St. Louis, Missouri, has Anheuser-Busch and the Gateway Arch. Milwaukee has Miller High Life and the Milwaukee Art Museum. And Potosi has Good Old Potosi Beer and the National Brewery Museum. 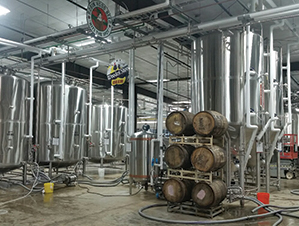 Potosi Brewery is one of the few breweries that can keg, bottle, and can quality beer in one place thanks to this state-of-the-art production facility, one of the best in the Midwest.

That’s right, this village tucked in southwest Wisconsin’s Driftless Area—with a population that hovers around 700 is the site of the country’s National Brewery Museum, which both aforementioned cities tried in vain to secure for themselves.

That honor went instead to Potosi, which emerged victorious over its two big-city rivals after a well-prepared campaign convinced the powers-that-be that this little community had the commitment and resourcefulness to successfully host a national-caliber museum.

Now marking its 10th year, the National Brewery Museum is a must-see stop along the Great River Road National Scenic Byway. Housed in the historic Potosi Brewing Company building, the museum explores the nation’s brewery history, with emphasis on brewing in the Midwest.

One needn’t be a beer drinker, however, to appreciate this museum. It’s also a haven for history lovers and collectors, with three floors of exhibits showcasing an abundance of historic memorabilia including beer bottles, cans, coasters, signs, and advertisements.

Exhibits focus on various themes such as Beer Goes to War and Prohibition. Antique beer-making equipment is displayed throughout, some of it in a ground-floor cave where the beer was stored in the days before electric refrigeration was available.

Many of the exhibits are interactive, featuring audio and video stations. An all-inclusive self-guided tour ends with samples of the Potosi Brewery beer that is once again brewed on site. The brewery’s own Potosi Root Beer is also available for post-tour sampling.

Triple Attraction The National Brewery Museum is just one portion of this multi-faceted attraction. The historic brewery building is also home to the Potosi Brewing Company Transportation Museum, which explores the role transportation played in the brewing and marketing of Potosi beer. 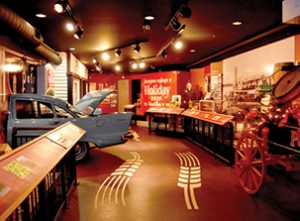 The nearby Mississippi River once played a huge part in meeting the area’s transportation needs, so it’s no surprise that the facility was also selected to house one of the interpretive centers that connect the historic settings along the Mississippi River. As such, the Potosi Brewery Interpretive Center welcomes guests traveling along the Wisconsin corridor of the Great River Road.

Also on site and available for tours is a state-of-the-art production facility, opened in 2015. This is where Good Old Potosi Beer is made, and where beer for a growing number of other breweries is made as well. 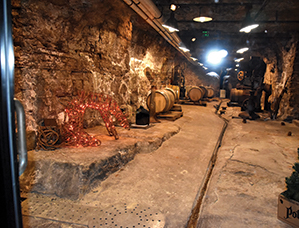 A cave set inside the hillside behind the brewery was used to store beer before electric refrigeration was available.

Then and Now Walking through the restored building, it’s easy to imagine what the original Potosi Brewery facility was like in the mid 1800s when it was a thriving brewery the first time around. It was founded in 1852 by Gabriel Hail and John Albrecht, who produced beer for a mostly local crowd. Adam Schumacher bought the brewery in 1886, and along with his brothers Nicholas and Henry, renamed it the Potosi Brewing Company in 1906.

At its peak, the Potosi Brewery was the fifth largest brewery in Wisconsin, producing labels including Good Old Potosi, Holiday, and Garten Brau, and marketing them throughout the country. The company ceased operations in 1972, and the building fell into disrepair.

Fund-raising for restoral began in 2000, when the Potosi Brewery Foundation was founded, and the doors opened again in 2008. 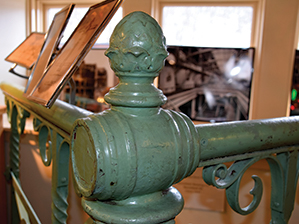 The museum is filled with historic brewery artifacts such as this barrel-topped newel post, crowned with a hops cone, and some iron handrails from the Schlitz brewhouse in Milwaukee.

Frank Fiorenza, a member of the foundation’s board of directors, was part of a local team that met with members of the American Breweriana Association in 2003 to discuss potential locations for a planned national museum. Representatives from St. Louis and Milwaukee were also invited to lobby on behalf of their own cities. The Potosi crew’s pitch stood out.

“We had a building, and the other two cities didn’t,” Fiorenza said. “We also had done a feasibility study. They hadn’t.”

Breweriana representatives visited Potosi and toured the old brewery building, which was still in early stages of restoration. Later, the group toured Potosi’s fire and rescue facility, where talk turned to how the village itself fully funded the building and all its equipment through grants, contributions from community organizations, and personal donations.

“After that meeting the Breweriana president said, ‘If a community of 700 can have a building like this, then I believe you can restore that building [the brewery]too,’ ” Fiorenza said.

The National Brewery Museum and its sister attractions now draw visitors from all over the world, especially during the summer when guests can wrap up a tour by sipping Good Old Potosi Beer or Potosi Root Beer on the deck outside the family-friendly Brew Pub and Restaurant.

Fortunately, the summer season begins early here, with the full seven-day-a-week schedule returning April 1. That leaves plenty of opportunity to take in this unique museum, filled with a big-city collection and small-town charm.—Mary Erickson 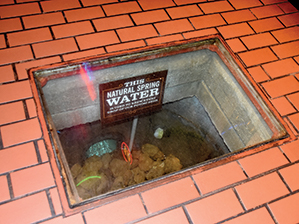 The Potosi Brewery, with its museums and restaurant, is located at 209 South Main Street, Potosi. For more information including hours and tour packages, visit potosibrewery.com or call 608-763-4002.