QUICK: What is the effect by which a material with a small positive magnetic susceptibility creates a magnetic field in the direction of an applied field?

If you answered “paramagnetism,” you might be a good candidate for a national competition that brought a team of Wisconsin students to Washington, D.C., this spring.

Though not the overall winners, a team from Marshfield High School performed well in this year’s finals of the National Science Bowl competition, sponsored by the U.S. Department of Energy (DOE). It’s a big event, an important event, but by no means a new event for students from the school or their coach, retired science teacher Paul Herder, who’s been a member of Clark Electric Cooperative for 32 years.

Introductory materials from the DOE identify the National Science Bowl (NSB) as “a nationwide academic competition that tests students’ knowledge in all areas of science and mathematics.”

Participation by middle and high school student teams is invited, with each team made up of four students, one alternate, and a teacher serving as advisor and coach. Those who remember the 1960s television series “GE College Bowl” will have some familiarity: As described by the DOE, “teams face-off in a fast-paced question-and-answer format, being tested on a range of science disciplines including biology, chemistry, Earth science, physics, energy, and math,” or STEM for short—science, technology, engineering, and mathematics—fields that government and the business and manufacturing communities have been urging more U.S. students to enter.
The NSB was launched in 1991 to cultivate high levels of student achievement in math and science and to encourage career development in those fields. The DOE says about 305,000 students have participated during the course of the NSB’s 29-year history, adding that—not surprisingly—it’s “one of the nation’s largest science competitions.”

Starting each January, more than 9,000 high school students and 5,000 middle school students join the competition in 65 high school and 50 middle school regional tournaments managed by the DOE’s Office of Science. The Office of Science is the single largest supporter of basic research in the physical sciences in the United States, and according to the agency, it’s “working to address some of the most pressing challenges of our time.”

The Best of Badgerland

Wisconsin Energy Cooperative News found out about the Marshfield team’s involvement this past winter, through a DOE notification listing Wisconsin participants. The notice listed nine teams, mostly from Milwaukee, its suburbs, and the Madison area—Brookfield, New Berlin, Waukesha, McFarland and Middleton—along with Appleton and Marshfield. They would compete at the regional level in mid-January to determine which team would represent Wisconsin in the national finals at the end of April.

For Paul Herder, this is an annual affair. He told us Marshfield High has fielded a team for 17 years and 2019 marks the sixth time they’ve made it to the nationals.

On January 13, Marshfield won its regional tournament in Milwaukee. In a congratulatory statement, Energy Secretary Rick Perry noted that the NSB “has grown into one of the most prestigious and competitive science academic competitions in the country, challenging students to excel in the STEM fields so vital to America’s future.” He noted that in the national finals, the Marshfield team would be “competing against some of the brightest science, technology, and engineering students across the country.” 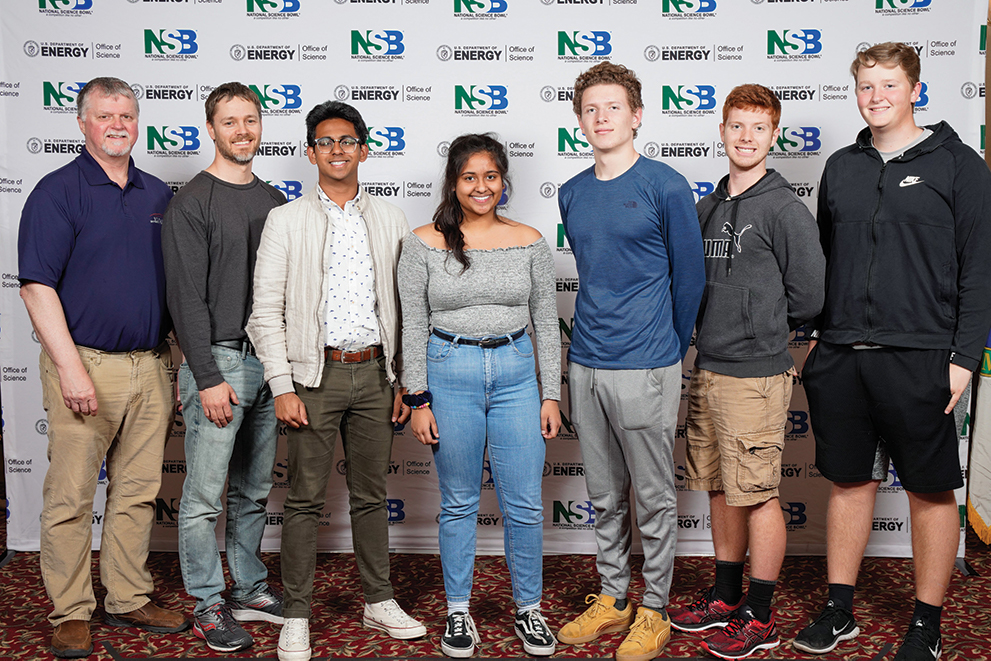 About that, there would seem to be little doubt. Marshfield’s team captain Suhaas Bhat shared with us some of the competition questions in addition to the one that opens this article. Contestants needed to be able to quickly answer queries like the following:

From the field of chemistry:

“How many orbitals are in subshells with the azimuthal quantum number equal to zero?” (Answer: one.) 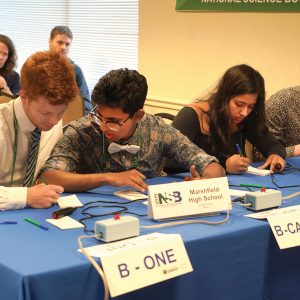 “Also known as braking radiation, what effect occurs when a charged particle is deflected and undergoes deceleration?” (Answer: Bremsstrahlung, and no, that is not a typographical error.)

The NSB finals are designed along lines similar to the National Collegiate Athletic Association’s basketball championship, as a double-elimination tournament starting out with 64 teams. This year, Marshfield won three matches before being eliminated in a fourth. The ultimate winners were the team from Wayzata High School in Plymouth, Minnesota.

Catching up by phone while the team was in a Washington airport awaiting the trip home, we asked Suhaas—a senior who’s headed for Harvard this fall—about the most fun and most demanding aspects of the competition. “There’s a whole lot of adrenaline involved,” he replied. “You’re thinking several seconds ahead, calling up information you might not have looked at in five or six years.” 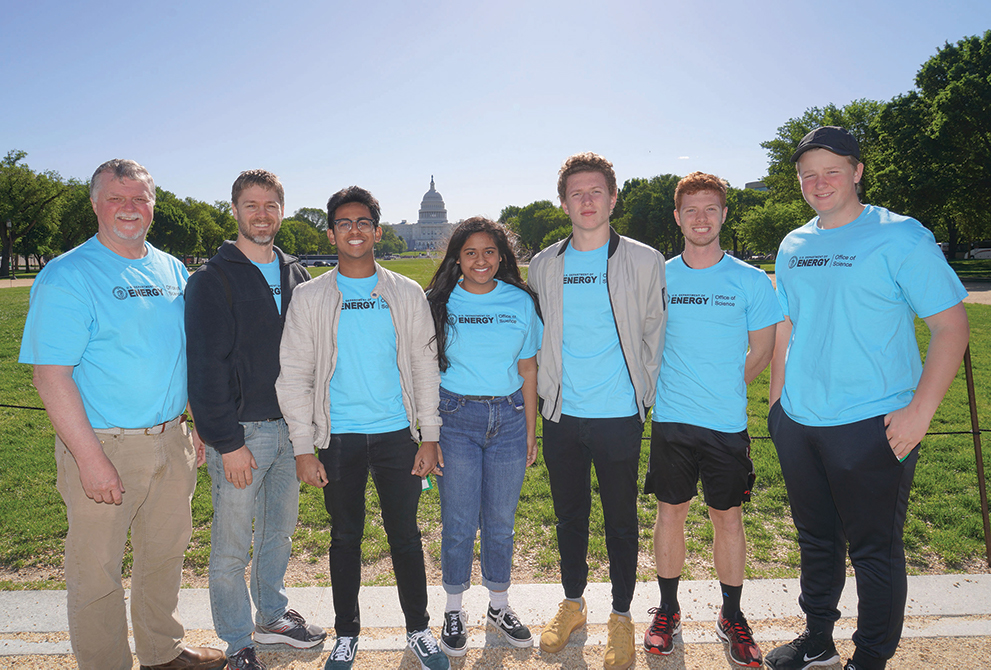 The team tours the National Mall during a break in the competition. Photo courtesy of Dennis Brack, National Science Bowl, Department of Energy, Office of Science

Suhaas’ younger sister, a sophomore, was on this year’s team and plans to return. All told, more than 20 Marshfield students tried out for a slot in the five-member group. Paul Herder, though retired, says he’ll stay on as coach “for as long as they’ll let me.”

The Wayzata team will receive an all-expenses-paid science trip later this year to Alaska, where they’ll have opportunities to learn about glaciology, marine and avian biology, geology, and plate tectonics.

How did they win? By answering this: “A group of DOE Office of Science researchers conducted a conformation analysis of the epidermal growth factor receptor using modeling and time-resolved fluorescence microscopy. Identify all of the statements that are true concerning this protein.” The correct answer was, “It is a receptor tyrosine kinase.”