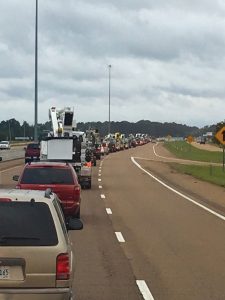 More than 900 electric cooperatives serve the energy needs of their member-owners across the United States, and on the interstate highways of the southeast for a few days in mid-September, it might have looked like every one of them had loaded up all manner of vehicles and equipment for a mass migration to Florida.

The reality was a mission, not a migration. Co-ops in 23 states dispatched crews to help restore electric service for Florida, Georgia, and South Carolina cooperative members left without power by Hurricane Irma. Among those responding to Florida’s call for help were 18 Wisconsin cooperatives, sending more than 40 vehicles and 52 crew members among at least 5,000 who converged on the storm-damaged areas.

The sheer numbers of line workers turning out to help rebuild shattered infrastructure accelerated the restoration of power.

Until Hurricane Harvey struck Texas in August, it had been 12 years since the most recent U.S. landfall of a major hurricane—category 3 or higher—a stretch of good luck unprecedented in federal government records dating back to 1851. (Restoration of co-op service following Harvey did not require assistance from outside Texas.)

After Hurricane Katrina battered Louisiana and Mississippi as a category 3 storm at the end of August 2005, crews from 14 Wisconsin co-ops rotated in and out of Louisiana for nearly a month, rebuilding the distribution system of Washington – St. Tammany Electric Cooperative.

But after Hurricane Irma, no rotation was necessary: From beginning to end, the Wisconsin deployment lasted 10 days. Crews departed for Florida’s Clay Electric Cooperative September 11th, arrived late on the 13th and, working four, 16-hour days, completed their tasks on the 17th. They were back in Wisconsin by mid-day September 20th.

One reason is that while Irma was a particularly vicious storm over the Caribbean islands, it rapidly lost strength after making U.S. landfall near Key West as a category 4 storm. Weakening quickly to a category 2, it nevertheless remained powerful enough to knock out service to as many as two-thirds of all Florida electricity consumers. 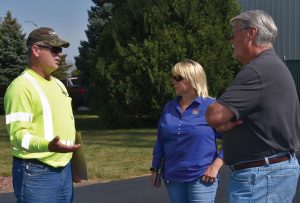 Lessons learned from the Katrina experience also helped improve efficiency in the Irma recovery. This time, individual states were quick to set aside regulatory roadblocks such as truck registration and weight inspection requirements, to allow swift passage of relief convoys to the affected areas.

The Katrina response suffered additional delay in some cases because of uncertain or nonexistent diesel fuel supplies. The Wisconsin contingent’s departure for Louisiana was held up for a few days after reports of crews from other states being stranded without accommodations and unable to refuel their vehicles. Such problems were averted this time by Florida officials ensuring fuel supplies and state government and the Florida Electric Cooperatives Association providing information about fuel availability and assisting with route planning through areas where flooding was a risk. 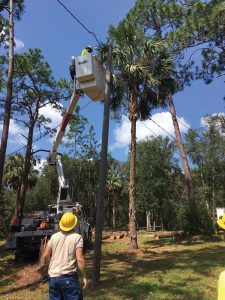 Maintenance and repair work on an electric distribution system is never something to be undertaken casually, but in disaster recovery, the hazards are multiplied many times over. Countless storm-damaged trees and the danger that emergency generators might backfeed voltage into downed lines are just two examples.

Such concerns were a daily part of the co-ops’ Irma relief effort. Even unfamiliar flora and fauna—and some familiar ones—were on the watch list. Crews could expect to encounter “critters we aren’t used to,” warned Garry Christopherson, Dairyland Power Cooperative’s director of safety and security in an early-morning conference call minutes before trucks began rolling south. “Some of the Florida snakes and spiders aren’t friendly like ours,” he said. “Be aware of your surroundings.”

Line workers were warned not to wade into standing water: They might encounter an alligator. One line crew captured a photo of a black bear crossing a road in their work area. 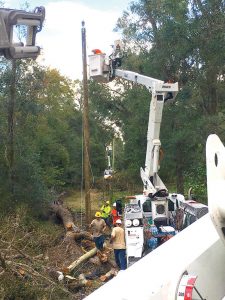 In a Saturday-morning email update midway through the task, Oconto Electric Cooperative Line Superintendent Jack Pardy, leading the relief contingent, described the daily routine: “We have breakfast at our staging area then a tailgate [briefing]for any issues or concerns. I remind them priority number one is their and crew safety. We all came here together, we go home together. Head on a swivel, gloves and grounds!”

As in the Katrina operation, the Wisconsin crews were kept together, working as an intact unit to minimize potential for confusion and maximize safety. Insistence on that approach has paid dividends. The worst injury to a Wisconsin Katrina worker was a sprained ankle, despite what a co-op newsletter at the time described as “the triple hazard of lengthy workdays under stressful weather conditions in a debris-strewn environment.” There were no reported injuries to Wisconsin’s Irma volunteers. 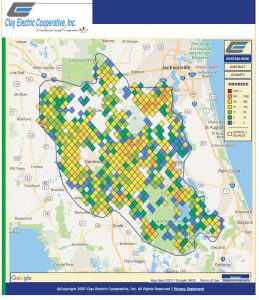 The same day the Wisconsin crews began work in their assigned portion of Clay Electric’s 14-county service area—following their three-day trek—some workers were set to be released from assignments in parts of Georgia and South Carolina where Irma’s damage had been less severe. That enabled redeployments into harder-hit southern Georgia and Florida, making completion of the relief mission possible sooner than anyone first expected.

A second round of volunteers had been recruited in anticipation of a longer rebuilding project, but the initial group of Wisconsin workers met the local co-op’s estimate of when they would finish their tasks with a full 24 hours to spare. By September 21, the 12th day after Irma’s landfall and one day after the Wisconsin convoys reached home, all but a handful of Clay Electric members saw power restored. 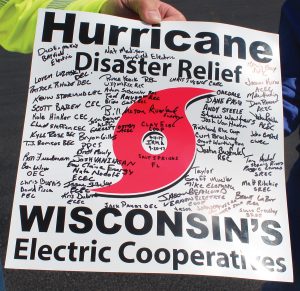 After the 2005 recovery effort, Billy Gibson, communications director for the Association of Louisiana Electric Cooperatives, wrote of Wisconsin volunteers “actually thanking me” for the “privilege” of helping his state come back from Katrina’s destruction.

On September 14 this year, similar sentiments were highlighted from a subtly different perspective. In an early-morning conference call of relief coordinators, someone from a state hit by Irma expressed thanks for everyone else’s help. For a second or two there was silence, then an unidentified voice with a deep southern accent replied, “It’s better to give than receive.”