If If you build it, they will come. At first, those at Dairyland Power Cooperative weren’t so sure.

Working together with conservation groups nearly 30 years ago, they launched the Peregrine falcon Restoration Program and installed nesting boxes for the endangered raptors hundreds of feet up the stacks at the Alma and Genoa generating stations. Then they waited. And waited.

It took a few years, but in 1997, a pair of Peregrine Falcons made their home in the Alma nesting box and produced chicks, marking the first successful Peregrine hatch in Western Wisconsin in 25 years. Since then, 153 chicks have left Dairyland site nests, and watching the whole process on the co-op’s live bird cams has become a popular hobby for people of all ages. 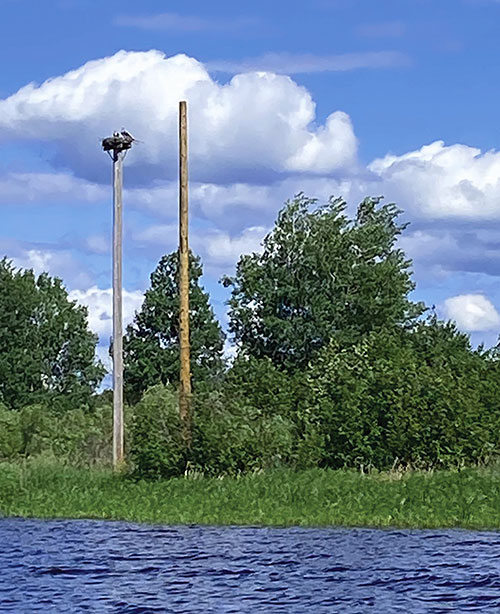 Along with the Peregrine Falcon Restoration Program, and in a true cooperative effort, Dairyland worked with Jump River Electric Cooperative and the Rusk County Wildlife Restoration Association in 2007 to install a platform for an osprey nest on the banks of the Dairyland Reservoir near Ladysmith. This Spring—with the closing of the Genoa Station #3 site—Dairyland and Jump River worked together with the Raptor Resource Project together to install a bird cam near the osprey platform, launching a whole new viewing experience.

“Since they (ospreys) have come back this winter, they’ve been on that nest every single day,” said Campbell. “It’s something new that we weren’t really sure we would see. We didn’t know if it was going to be successful because (without a camera on the rural site) we never really saw them that often. Sometimes we’d see them up there, but we didn’t know if they were using it as a nesting site or just using it as a perch.”

“This camera provides an educational opportunity to bird watchers, students, and the general public. This project aligns with the cooperative principles JREC was founded on,” said Jump River Assistant Manager Kurt Harris.

The solar-powered osprey bird cam went live last month, just in time for Earth Day. It offers the public a real bird’s-eye view of the habitat, 24 hours a day. Dana Bolwerk, communications and marketing specialist for Dairyland, and her family are among the avid viewers of the raptor reality shows. 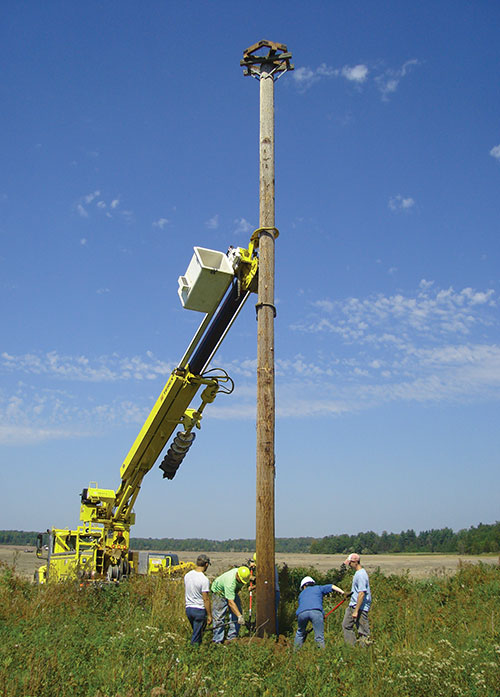 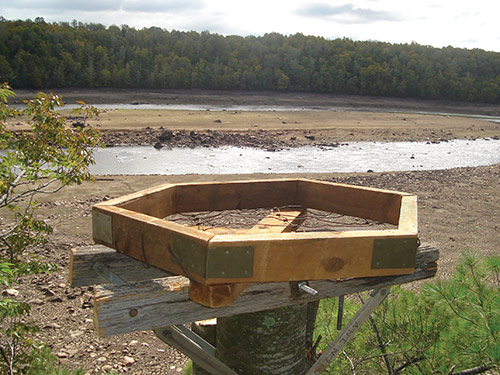 A bird’s-eye view of the osprey nest platform at the Dairyland Reservoir near
Ladysmith, which has been outfitted with a bird cam so viewers can watch the birds live.

“It can kind of get addicting sometimes,” Bolwerk said about the live birdwatching. This year, four Peregrine falcon chicks hatched over Mother’s Day weekend. “It’s so fun to check and see how many chicks there are, and you can watch their interaction and their dinnertime, and you can actually see what the chicks look like before they’re even able to fly.”

Ospreys, which are also known as sea hawks, river hawks, or fish hawks, are unique in that they exist in most parts of the world. They are glorious and fascinating in their own right with a remarkable wingspan stretching six feet, and the agile ability to catch their primary diet staple—fish.

“Falcons mostly like to eat birds and eagles are more scavengers. Hawks will eat mice and so forth, but ospreys are really adapted for fishing and will actually dive full into the water to catch fish with their talons. You’ll actually see them kind of hovering above the water. They have such keen eyesight that they can pick out fish several feet below the water and then dive feet first up to a meter below the water to catch their fish before bringing it back to the nest to eat it,” Campbell said.

According to the Wisconsin Department of Natural Resources, ospreys return to Wisconsin between early April and mid-May and begin the nesting and mating process. They usually lay two to four eggs in late May or early June, which will hatch in about five weeks. The chicks fledge (leave the nest) when they are about eight weeks old.

Ospreys are monogamous and tend to mate for life, although they may vacation (migrate) separately. They typically head south in September, but first, we have a summer full of rare opportunities to see osprey activity.

“This is all new to us as we’ve never really watched ospreys before,” Campbell said. “We really don’t know what exactly they will do, so this is something totally new that’s so exciting.” 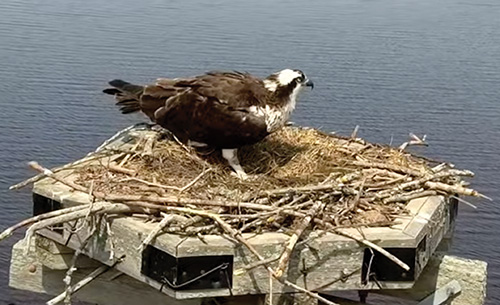 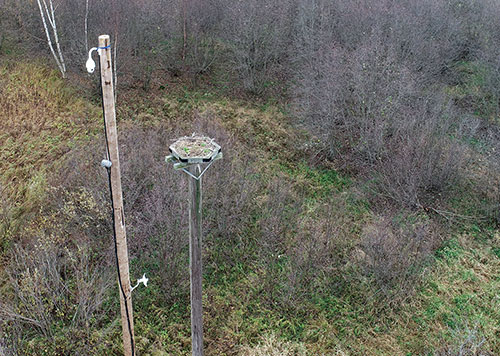 Viewers can watch the osprey nesting/hatching process live via the bird-cam
that was installed this past spring. The osprey cam can be accessed via a tab
at the top of Dairyland Power’s website, dairylandpower.com.

This project is only a small part of Dairyland’s stewardship and conservation programs, which also include fish habitat projects, prairie restoration and pollinator habitat improvement projects, educational outreach, school visits, and more. None of the programs are required by state or federal law, but Dairyland, Jump River, and other Wisconsin electric cooperatives have a long history of supporting community conservation and education efforts which cost relatively little, but mean a lot.

“It’s just something we want to do to give back to the communities where we do business,” said Campbell. “We’ve always been fortunate that Dairyland and our leadership have embraced the importance of these programs. It’s just great.”

To see the new live osprey cam or falcon cam, go to DairylandPower.com and click on the buttons at the top of the home page.—Julie Lund