Temperatures might be a little chilly in northern Wisconsin this time of year, but around the Hayward area things are heating up as “Birkie Fever” sets in.

The American Birkebeiner, North America’s largest cross-country ski race, transforms this small Sawyer County community into a world-class ski gathering each February. On race day, approximately 13,000 skiers from all over the globe skim over the 50-kilometer course, their bright racing gear creating a kaleidoscope of color as they speed down Hayward’s snow-covered Main Street to the finish line. Throngs of spectators line the course, cheering and ringing cowbells throughout.

It’s a sight to behold, whether you’re a ski enthusiast or not. 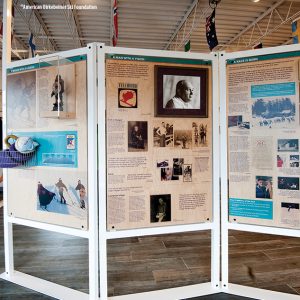 The American Birkebeiner has evolved over its 40-plus years into an extended weekend of activities accommodating all ages and skill levels. Known today as the Slumberland American Birkebeiner, Powered By Swix, the main race will be held on February 23, the third of four days’ worth of Birkie festivities.

Leading up to the main event are a variety of activities including shorter races and noncompetitive tours for beginners and children; a race for adaptive ski athletes; and a Barkie Birkie Skijor, based on the historic Norwegian sport of skijoring, for which a skier would be pulled along the snow by a reindeer. In today’s version, dogs replace the reindeer.

Events build to the traditional Kortelopet Classic on February 22, a 29-kilometer race, and finally to the iconic Birkebeiner race, with its punishing distance of 50 kilometers for ski skaters and 55 for classic skiers. Part of the Worldloppet circuit of 20 international ski marathons, the American Birkebeiner attracts the best Nordic skiers from around the world. Last year’s race included skiers from 49 states and 36 countries.

Competing alongside these world-class athletes are plenty of “citizen” skiers, many of them from the surrounding area. Jump River Electric Cooperative member Larry Huseth is one such local skier for whom participating in the Birkebeiner is an annual tradition.

“I have completed 14 Birkebeiners and four Kortelopet races and look forward to skiing the race each year,” he said. “The Birkie Trail is challenging to ski, and when you complete your race you get a great feeling of accomplishment. It is great to have the American Birkebeiner trail in Hayward and be able to get out and enjoy the winter season.”

To Inspire and Honor 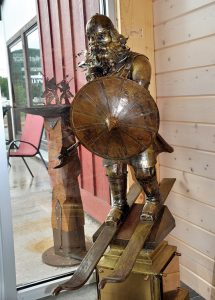 You don’t have to wait for Birkebeiner weekend—or even for winter, for that matter—to appreciate this event. The Birkie is woven through Hayward’s culture. Many of the city’s establishments tout the race’s history and sport a Norwegian flair within the décor. You can learn plenty about the Birkebeiner simply by walking down Main Street and visiting the local businesses.

Opened in 2016, the museum commemorates the legacy of the race and helps inspire future generations of skiers. It also presents the stirring history behind the famous race, which got its name from the story of two Norwegian Birkebeiner warriors—so named for the birch-bark leggings they wore—who famously skied 55 kilometers across the snowy mountains of Norway’s Osterdalen Valley in 1206, smuggling a baby prince to safety during the Norwegian Civil War. 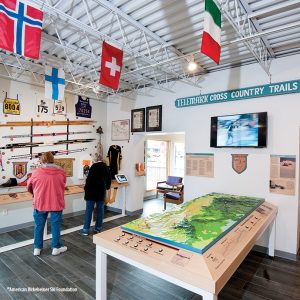 The Tony Wise Museum of the American Birkebeiner in Hayward features exhibits showcasing the history of the world-renowned cross-country ski race and its founder, Tony Wise. A statue at the museum’s entrance depicts one of the Birkebeiner warriors who whisked the young Norwegian prince on a long, treacherous journey through the forests to safety in 1206 during the Norwegian Civil War.

The American Birkebeiner was founded by Tony Wise, a World War II veteran whose grand vision for, and tireless promotion of, his native northern Wisconsin resulted in the creation of some of the area’s most recognizable features and events.

Wise launched the Telemark ski resort in nearby Cable in 1947 upon returning from Germany after World War II. While in Germany, Wise discovered skiing and learned of the Birkebeiner Rennet ski race, held each year since 1932 in the forests of Norway. The Birkebeiner Rennet commemorates the successful rescue across the snowy mountains of young Prince Haakon, who would become Norway’s king in 1217 and reign for 46 years.

Wise brought the Birkebeiner Rennet concept to his ski lodge in northern Wisconsin, hosting the first American Birkebeiner in 1973 for 35 skiers. Over the years, the race grew in numbers and prestige under Wise’s guidance. In 1978 he formed the Worldloppet League, connecting the American Birkebeiner with the world’s most prestigious races.

Telemark Lodge would struggle financially in later years, but the Birkebeiner kept going strong. When Wise lost Telemark to bankruptcy in 1985, the ABSF was formed to assume leadership over the race, maintain the Birkebeiner Trail, and preserve Wise’s rich legacy in the Hayward/Cable area, in part by opening the museum. The organization has built on Wise’s vision by promoting cross-country skiing, particularly among youth, and offering year-round activities that promote healthy lifestyles.

Exhibits inside the museum tell Wise’s story as well as the story behind the Birkebeiner race itself, with plenty of historic photos and race memorabilia displayed throughout.

Among the artifacts that can be seen there are the St. Olav Medal presented to Wise by King Olav of Norway in 1975; a congratulatory message from President Ronald Reagan to American Birkebeiner race organizers in 1988; and the classic ski (longer than the skate ski) worn by John Bauer in the men’s 10K classic race in the 1992 Olympic Games in Albertville, France.

In another exhibit, a collection of ski equipment and clothing shows how the sport has changed over the years.

Special hands-on exhibits include a three-dimensional model of the Birkie Trail, a recreational trail system for silent sports spanning more than 100 kilometers from Bayfield to Sawyer County. The Birkie Trail also provides much of the American Birkebeiner’s race courseThere’s also a collection of replica Birkebeiner costumes for young visitors to try on as they re-enact the young prince’s rescue in front of a diorama of the Norwegian mountains. 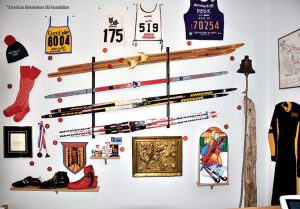 A visit to the American Birkebeiner museum may even inspire you to strap on some cross-country skis and take to the trails yourself. If so, there are plenty of places in the area to pick from. Sawyer County is a winter playland, with more than 200 kilometers of cross-country ski trails in the Hayward area alone.

With a trail pass, required during the winter months, visitors can explore the Birkie Trail’s groomed trails, traversing some of the same kilometers that the world’s best skiers race over during Birkie weekend. During other seasons, the Birkie Trail is available for hiking, running, and some mountain biking.

Whether you choose to visit during American Birkebeiner week or not, a visit to Hayward just might make a Birkebeiner out of you. Just be aware of that well-known Birkie Fever—it’s catching.—Mary Erickson