Okay, we admit, January is not typically a month that triggers thoughts of “road trip” as a great way to spend an afternoon. But a drive along what’s known as the West Coast of Wisconsin—the 15-mile stretch of the Great River Road National Scenic Byway that winds around majestic Lake Pepin in Pierce and Pepin counties—is a whole different experience in the winter. The route passes through stunning topography, breathtaking river views, and historical stops that take on a completely different look and feel during the colder months. And when you need to step out of the chilly air, the charming river towns that line this road offer unique stops for food, folklore, fine arts, and one-of-kind shopping. 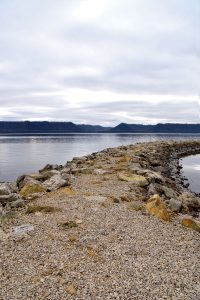 First, there’s the lake itself. Lake Pepin is actually a 21-mile widening of the Mississippi River, formed by the backup of water behind sedimentary deposits of the Chippewa River’s delta. It’s the largest lake along the river, and it provides for an abundance of outdoor activities.

However, you don’t have to be boating or fishing to enjoy it—just looking at this vast body of water is enough. A drive along the River Road (Highway 35) includes numerous scenic look-out points for travelers who want to pause and take it all in. During the winter, when the water’s edge is frozen and the trees are laced with snow and ice, the entire vista takes on a magical look.

Although the sparkling frozen views are soothing and silent, they are hardly still. Located as it is along the Mississippi Flyway, Lake Pepin is a bird-watching paradise, even in the middle of winter. Bald eagles can be spotted at almost every stop, swooping down to the water for fish or perched in the trees along the shorelines. 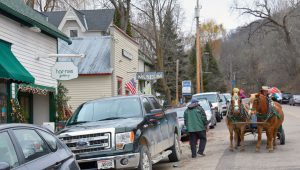 Art galleries, museums, and historic buildings fill the streets of Stockholm, one of the communities along the Great River Road.

The scenery is just as beautiful on the other side of the road. Majestic bluffs separate the four quaint communities located along this noted drive, plus some points just north of the lake’s edge. Located roughly seven miles apart from each other—about the distance an early river boat could travel before needing to be restocked with more firewood—these villages are rich with history.

At the southern entrance of Lake Pepin is the Village of Pepin, which was once a steamboat boom town familiar to Mark Twain. He’s not, however, the author the village is most associated with—that’s Laura Ingalls Wilder, the beloved children’s author who penned the famous series of books chronicling her pioneer family’s journey westward. That journey began near Pepin, where Wilder was born. The first book of her series, “Little House in the Big Woods,” was based on her early experiences there. 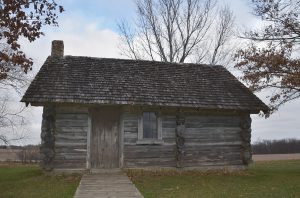 A replica of the little one-room cabin where Wilder first lived stands at a wayside just north of Pepin on the original site of Wilder’s birth, on County CC. The cabin is open year-round, and its simplicity offers a glimpse into what life was like for Wilder and her hardy pioneer family. Standing inside the drafty, tiny cabin on a chilly winter day, one can’t help but feel a whole new level of awe for the family of five that endured long Wisconsin winters here.

In the village itself is a museum dedicated to Wilder’s life. The museum is typically open daily from mid-May through mid-October, but this winter both the museum and the cabin will be bustling with activity in celebration of the 150th anniversary of Wilder’s birth, on February 7, 1867.

On February 4 and 5, the museum will be open to mark the milestone anniversary, and weather permitting, a celebration will be held at the cabin. Visit lauraingallspepin.com to learn more details as the date approaches.

Pepin is also home to two of the four stops along the Lake Pepin Wine Trail, which features four wineries around the lake—two in Wisconsin and two in Minnesota. Pepin’s offering is the Villa Bellezza, a Mediterranean-style winery right on the River Road that resembles a traditional Italian villa, complete with a village square fountain. For extra winter fun, this winery teamed up with a neighboring farm to create a recreational cross country ski/snowshoe trail through the grapevines and on through the woods. 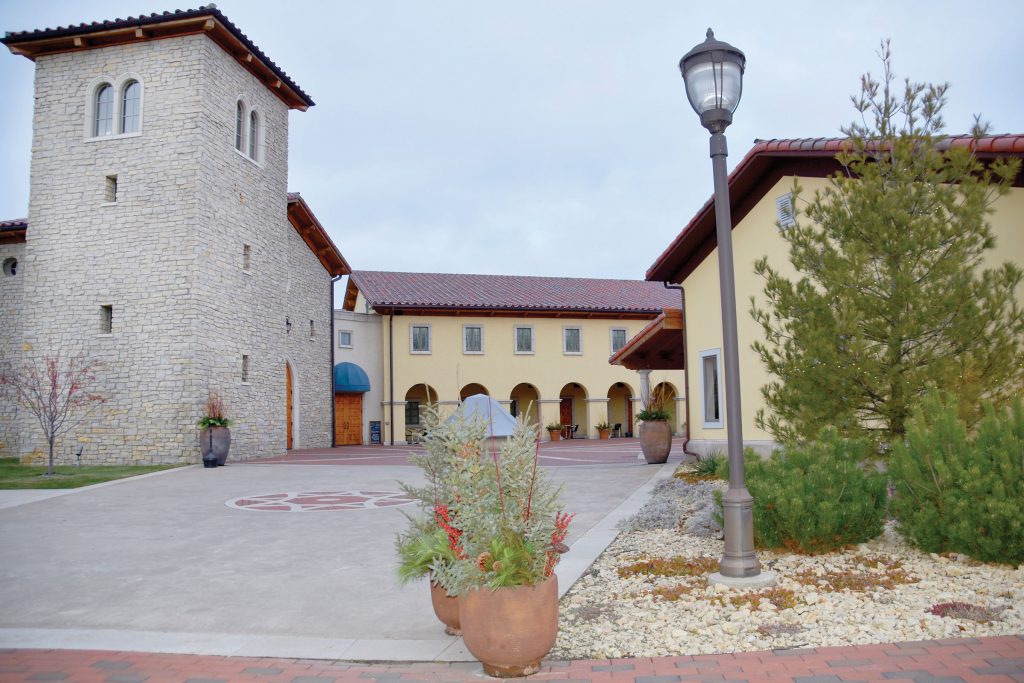 It may look like an Italian village, but this is really the Villa Bellezza, a winery in Pepin and one of the stops along the Lake Pepin Wine Tour. 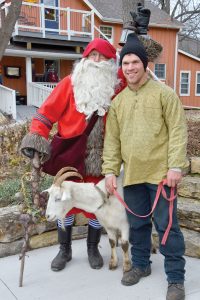 Tomte (Swedish folk character associated with Christmas and the winter solstice) and a goatherder greet visitors at a Stockholm holiday celebration.

North of Pepin is the Village of Stockholm, which was a bustling stopover for Scandinavian immigrants to western Wisconsin in the second half of the 1800s. The Swedish influence is still very evident in this quaint village, but it’s also known today for its vibrant arts and culture scene. The riverside main strip is dotted with art galleries and museums located in historic buildings. A performing arts center is housed in the former Stockholm Opera Hall, offering a full schedule of drama, music, comedy, and folk performances.

This village is also home to a variety of unique specialty shops; it was even rated as one of the top five shopping destinations in Wisconsin by Travel Wisconsin.

Past Stockholm is Maiden Rock, a village anchored by a spectacular limestone cliff that’s central to the story behind the village’s name. Several versions of this story exist; each is slightly different, but the main theme is the same. A young Dakota girl, distraught over her family’s insistence that she marry a young man not of her choosing, precipitated herself off the bluff overlooking the lake rather than face a lifetime with a man she didn’t love. 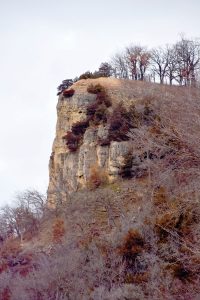 This haunting tale is told on a marker along the River Road, opposite of the imposing cliff that gave the village its name. The bluff itself is accessible to hardy hikers who are game for a vigorous trek via the Maiden Rock Bluff State Natural area, located between Stockholm and Maiden Bluff on Long Lane, off County E. Visitors who take the hike are treated to a stunning view of the river valley that’s said to be the best in all of Lake Pepin’s area.

The Village of Maiden Rock itself is not nearly as sobering as the story behind its name—this village too has a lively arts and culture scene. It’s also home to the second Wisconsin stop on the Lake Pepin Wine Trail—Maiden Rock Winery and

Cidery, which features wines and hard ciders made with apples grown at the winery’s orchard.

Beyond Maiden Rock is Bay City, located on the northern end of Lake Pepin. This village was once a thriving river town, serving as an express stop between Chicago and St. Paul. Today it serves as a gateway of sorts into Lake Pepin.

Between Bay City and nearby Hager City is the site of a well-known historic landmark known as the Bow and Arrow. This rock outline of a 185-foot bow and a 71-foot arrow is a bit of an archaeological curiosity. It was first observed by Minnesota archaeologist Jacob Brower in 1902, who suggested the image might be a bow and arrow drawn to shoot toward Lake Pepin. Dakota tradition was said to tell of this symbol’s existence as early as the 1600s, and it’s visible from a site once sacred to the Dakotas. However, modern archaeologists have speculated that the image might be a bird effigy. Whatever it is, the image itself is much easier to spot during the wintertime when it’s not partially blocked by foliage. 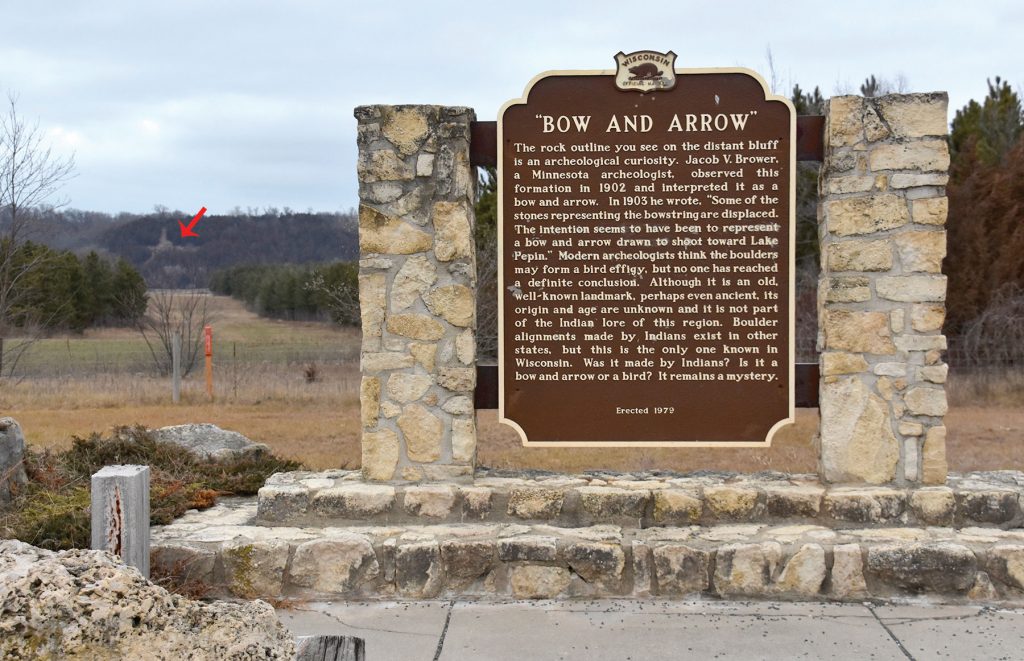 The bow and arrow rock formation is visible behind the sign (under the red arrow).

With all this history, geography, and culture, the West Coast of Wisconsin makes for one great road trip, even in the winter. Some might even say, especially in the winter.

For more information, including access to auto tour maps of the River Road around Lake Pepin, visit www.visitpepincounty.com or call 1-715-672-5709. More information can also be found at piercecountywi.com.