“Be alert for any ﬂu-like symptoms, aching joints, fatigue, rashes, bullseye rash, brain fog, and so forth. If you experience any of these things see a doctor…soon.”

That advice from Michigan resident Brian Anderson does not involve the illness you can’t escape hearing about all day, every day. Anderson has provided training for co-op and utility line crews in his home state and in Wisconsin, coaching them to avoid one of the more unpleasant possibilities arising from outdoor work in the woods and fields: Lyme disease.
The listed symptoms—especially a rash resembling a bullseye with a red center and two or more concentric rings—add up to a clear message. “DO NOT put off seeing a doctor,” Anderson emphasizes, “because early diagnosis and treatment of Lyme disease is extremely important. If left untreated it will only get worse and after several months it is really hard to get rid of.”

“I felt like my equilibrium was off,” Lehman told Wisconsin Energy Cooperative News, saying, “I felt unsteady; it was a foggy feeling.”

Delay Exacts a Painful Price
Bert Lehman knows all about the importance of early treatment because through no fault of his own, he didn’t get it. A dozen years ago, his case of Lyme disease went undiagnosed even after its effects were getting out of hand. Member relations specialist since last summer at Rosholt-based Central Wisconsin Electric Cooperative, Lehman began noticing numbness in his arms, legs, and feet in July 2008.
An editor of specialty publications at the time, Lehman suspects he was bitten by a tick while doing outdoor photography earlier that summer. In June, he began suffering daily headaches. Within weeks, his symptoms grew to include backache, joint pain, and muscle spasms. “I felt like my equilibrium was off,” Lehman told Wisconsin Energy Cooperative News, saying, “I felt unsteady; it was a foggy feeling.” 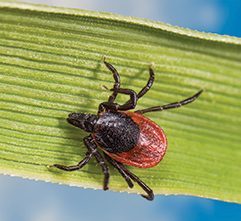 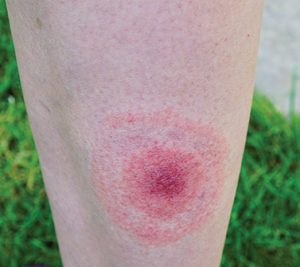 The Deer Tick—or Black-Legged Tick—is the only variety that harbors Lyme disease bacteria; however, the much larger Dog or Wood Tick and Lone Star Tick, both common in Wisconsin, carry other dangerous diseases. Not all Lyme disease patients experience the bullseye rash. Photos courtesy of Getty Images.

We recalled Brian Anderson referring to “brain fog.” Lehman replied, “I know exactly what he’s talking about.”
When the numbness appeared, he contacted a doctor and with discomfort in his left arm, was dispatched to an emergency room and tested for heart problems. He “checked out okay” and the mystery went unsolved.
Lehman then asked to be tested for Lyme disease and the result was negative. Later he learned that testing at that time returned false negatives at rates as high as 50 percent. Nothing got better, and by the fall of 2008 Lehman persuaded his doctor to treat him for Lyme disease. Progress, if any, was slow, and the doctor halted antibiotic treatment. At one point, Lehman said, a rheumatologist told him the problems were all in his head. Lehman found a website where he could enter his ZIP code and view a list of “Lyme-literate” physicians in his area. They were much in demand: his first choice was booked months in advance. In December another doctor began antibiotic treatment.

By March 2009, the physician he initially hoped to see put him on a course of three antibiotics, lasting more than a year and a half. Each bimonthly visit revealed progress against the Lyme symptoms.
All this time, work was a challenge. “I was lucky to have an office job because just walking would cause muscles to tighten up. I kept working and struggled through it,” he said.

A Frontline Facility
Wisconsin has become a hub for research into Lyme and other tick-borne illnesses, highlighted by the opening at Woodruff last summer of the Tick-Borne Illness Center of Excellence, a combined research and treatment facility. The Center is a project of the Woodruff-based Howard Young Foundation and the Open Medicine Institute, headquartered in California. 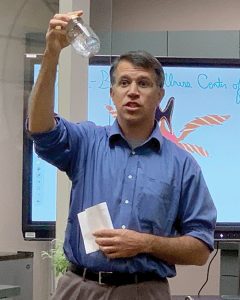 Dr. Andreas Kogelnik of the Open Medicine Institute, founding director of the Center, told Wisconsin Energy Cooperative News that tick-borne illnesses formerly more common in the northeast have been spreading southward and “exploded” in the past decade. Wisconsin, he said, is one of the top five states for tick-borne infections. Kogelnik said he considers it “telling” that the Centers for Disease Control and Prevention (CDC) recently increased estimates of active infections nationwide “by an order of magnitude, from 30,000 cases to 300,000.”
Kogelnik acknowledges the difficulty of accurately diagnosing Lyme disease. “Testing is definitely a big problem,” he said, noting “lots of false negatives and different types of tests.” The Center’s to-do list includes “a cross-sectional study of the performance of various tests,” he said; right now, “there isn’t a gold standard.”
“Part of the trouble,” Kogelnik told us, is that the wide-ranging symptoms vary “and if you have some selection from a list of several it’s probably Lyme.” The bullseye rash “is relatively specific but shows up in fewer than half the patients,” he noted, listing among other indicators “fever, cognitive neuropathy, just plain fatigue, and joint pains that move around.”
It might be a stretch to say Lyme disease has been the direct cause of deaths, but it certainly has the capacity to trigger or aggravate other conditions that can be fatal, Kogelnik explained, noting that a colleague died of a heart condition attributed to his Lyme disease.
We asked whether it’s realistic to believe Lyme disease is fully curable with antibiotics.
“It’s realistic but as with any infectious disease early treatment is better and the result depends on the underlying state of the patient’s immune system,” he said. 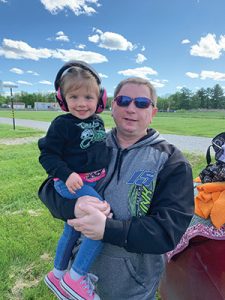 Bert Lehman, pictured with his granddaughter Sophia, enjoys a day at the Shawano Speedway after recovering from Lyme disease. Photo courtesy Bert Lehman

The Center is very much engaged in outreach to residents of the Northwoods area and will be seeking to extend its presence through mobile facilities. It maintains a website where much more information can be viewed, at www.tickcenter.org.
One hopeful note is that the CDC says a tick must remain attached for 36-48 hours before Lyme disease bacteria is transmitted to the host, so a close inspection immediately after visiting areas of likely  exposure may afford ample time to remove the bug before infection occurs. “We have patients walk through our door every day with ticks on them, and we test the ticks as well as the humans,” Kogelnik told us.

Don’t Get Bit!
Brian Anderson says removal of an embedded tick is best accomplished “gently,” using “ﬁne tip tweezers or a tick-key,” with which one should “grab it right down at the skin level and pull it straight up.” Squeezing the tick’s body is a very bad idea, as this may inadvertently inject infectious material. With the tick removed, Anderson recommends cleaning the nearby skin with ordinary rubbing alcohol, and retaining the tick in a plastic bag for potential testing.
Desirable as quick diagnosis and treatment may be, a better option is preventing tick bites in the first place. “Walk on paths, stay away from tall grass and low vegetation,” Anderson advises, adding that “Ticks need moisture for survival so they will tend to be more in shaded areas than sunny areas. They don’t fall from trees, they don’t jump, they just sit on a blade of grass or something until a host comes by, then hitch a ride and look for a meal.”

Image courtesy of the CDC

Light-colored clothing and tucking trousers into socks will aid in seeing the noxious creatures, and members of a group should watch for ticks hitchhiking on each other’s clothing when outdoors. Anderson runs a business as “The Tick Terminator” and mentions that those whose daily routine involves outdoor work can achieve effective prevention by treating shoes, clothing, and gear with permethrin before venturing into likely tick habitat. Prevention can also benefit from the realization that deer ticks aren’t particularly demanding when it comes to suitable habitat. During the early 1990s, when Lyme disease was first creeping into the consciousness of Wisconsin residents, close relatives of this writer learned that two of their children were infected. The problem was still largely unfamiliar in the region and the parents had been left to worry that the kids were just exceptionally sickly until the underlying cause was belatedly discovered and successfully treated. The takeaway? The family hadn’t been frequenting the deep woods; their infection occurred in knee-high grass bordering their lawn in suburban Waukesha. 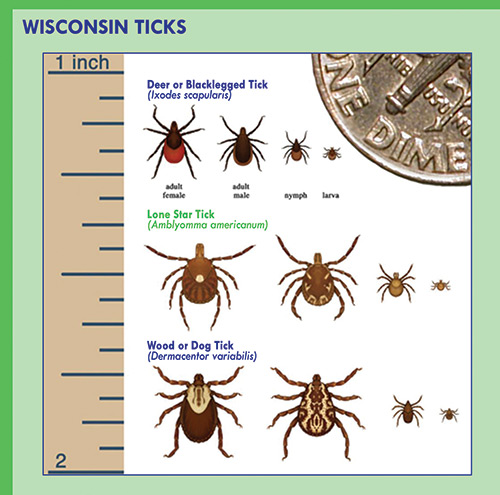 Image courtesy of the Wisconsin Department of Health Services

Long Haul to Recovery
Bert Lehman’s case took more than two years to fully resolve. He’s fine today but warns anyone spending much time outdoors to acquaint themselves with all the symptoms—he didn’t have the telltale bullseye rash—and if symptoms appear, be sure to see a doctor who’s familiar with Lyme disease.
“After this all took place it was several years before I felt comfortable going into wooded areas or tall grass,” he told us. Nowadays after he’s been in such areas, he showers and washes his clothing right away.
Even after decades of gradually growing awareness, Lehman says he’s concerned that Lyme disease is widely misunderstood. “The experience taught me that it’s not as simple as getting a bullseye rash and being on antibiotics for 21 days.”