Since the peak storm season began this spring, damaging weather has affected many parts of rural Wisconsin. Tornados, high winds, lightning, heavy rains, and flooding have caused significant damage to a number of electric cooperative distribution systems, prompting activation of mutual assistance among multiple co-ops to get the lights back on as soon as it could safely be done.

Right after one of those storms I received a call from a co-op member who was upset because his power hadn’t yet been restored and he thought it was taking too long. The storm had hit the night before. The member said it didn’t matter to him that roads remained impassable because of flooding and downed trees; the co-op should have his electricity back on by now. He went on to say his neighbors, served by an investor-owned utility, would already be back in service.

The member said he called his co-op multiple times to report his outage and was upset that it wasn’t a local person taking his call but someone from the Cooperative Response Center in another state. I assured him this differed from talking with the local co-op only in that the response center has the resources necessary to handle thousands of phone calls reporting outages and to help dispatch line crews to the right locations.

The caller, it seemed to me, was being totally unreasonable. It surprised me and made me think about the safeguards in place to help co-ops restore power as quickly as possible. On the other hand, there’s no reason to assume people would be familiar with those safeguards, so maybe some explanation is in order. 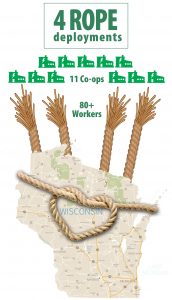 One such safeguard is the Cooperative Response Center, making sure a live person is available to receive and act upon outage reports no matter when the outages occur. And few probably realize Wisconsin electric cooperatives all participate in a program we call ROPE, for “Restoration of Power in an Emergency.” So far this summer we’ve seen four ROPE deployments with more than 80 workers from 11 different electric cooperatives traveling to assist other co-ops across the state. Responding to tornado damage, straight-line winds, flooding, and lightning, Wisconsin cooperatives come together to restore power as quickly as possible.

The angry caller also caused me to think about how electric cooperatives fare in comparison with other types of utilities. In a recently published study, the global marketing information services company J.D. Power examined overall residential electric utility customer satisfaction. The study provides ratings based on the survey responses from nearly 100,000 households. It examined six factors including power quality and reliability, price, billing and payment, communications, corporate citizenship, and customer service. I must say I’m happy to tell you I’m not surprised by the results, finding electric cooperatives outperform other utility types nationwide.

Measured on a 1,000-point scale, electric cooperatives posted an overall satisfaction score of 749, or 30 points better than the overall nationwide average. Regionally, co-ops scored 32 points higher than both large (a half-million or more residential customers) and midsize (100,000 to 499,999 residential customers) utilities in the Midwest. It’s obvious nobody gets a perfect score; it’s equally obvious the scores show cooperatives trying harder. I take pride in co-op employees working in some of the worst weather to maintain good customer service.

The co-op member who was upset over his outage had service restored after one day—a longer-than-average wait extended by flooding and washed-out roads. I later learned the neighboring investor-owned utility needed four days to get all the lights back on. No finger-pointing: Every line worker who has to face foul-weather hazards knows it can always be the other way around.

But we wouldn’t even think about trading places.