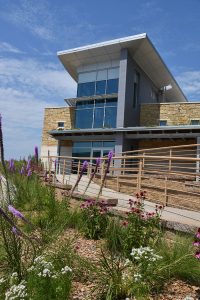 A journey along Wisconsin’s Great River Road is now even greater thanks to the recent opening of a new interpretive center near the National Fish Hatchery in Genoa.

Now in its second year, the state’s newest Great River Road Interpretive Center was made possible in part by a Scenic Byways Grant from the Mississippi Parkway Commission, according to Hatchery Manager Doug Aloisi. It’s the first such grant awarded to a national fish hatchery; however, visitors learn about much more than just fish here.

The facility offers exhibits and interactive displays about the ecosystems, peoples, culture, and history of the Upper Mississippi River. One gallery is devoted to the Battle of Bad Axe, which occurred just south of the hatchery and brought the Black Hawk War to its tragic end in 1832. Another gallery is dedicated to the river’s importance as a corridor of commerce through history, from the canoes of the early Mound Builders and fur traders to steamboats and barges. Outside the center, groomed trails, including a boardwalk over a wetland area, are dotted with kiosks that teach about the wildlife along the way.

And there are indeed fish—lots of them. A 1,000-gallon aquarium inside the center is filled with Mississippi River fish raised at the hatchery. Another smaller tank holds aquatic life that can be found in the area’s streams. 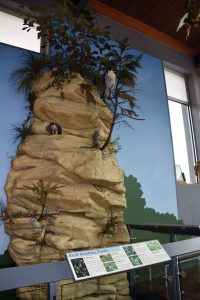 “It’s not just a fish hatchery visit. That’s what makes it kind of unique,” Aloisi said. “We wanted to not only incorporate more partners, but also more interests.”

Many partners were included in the interpretive center’s development, including Dairyland Power Cooperative, the wholesale power provider for 24 electric distribution cooperatives including 18 in Wisconsin. Dairyland contributed to an exhibit on bluff wildlife, which features a two-story model of a bluff supporting mounts of plants and animals that can be found along the Driftless Region’s steep banks. 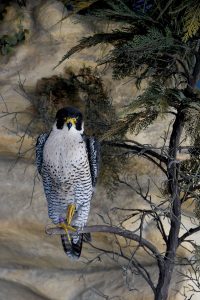 These mounts include the peregrine falcon, listed as an endangered species in the early 1970s but later removed from the list thanks to successful restoration efforts. Dairyland Power has contributed to those efforts through its Peregrine Falcon Restoration Program, begun in the early 1990s to help re-establish the peregrine falcon population in the Upper Mississippi Valley. This program provided for the installation of wooden nesting boxes atop the stacks at Dairyland’s plants in Genoa and Alma; visitors to the interpretive center can learn all about the program on a story-board display at the bluff exhibit.

Dairyland also contributed to the center’s new multimedia gallery, installed just this past summer. This touch-screen display enables visitors to scroll through a variety of content about the river basin, including photo galleries and educational games. Topics range from fish hatchery programs to “The River Through The Arts.” 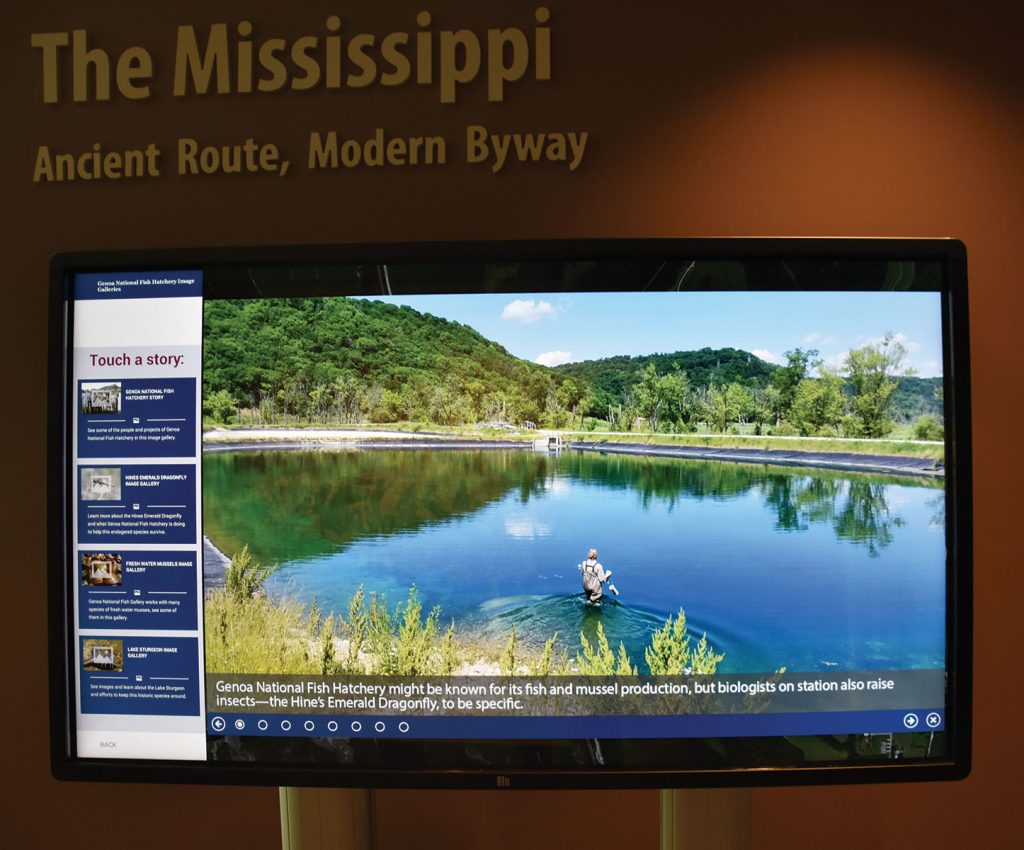 Included among the exhibits are those detailing the history of the fish hatchery and its work in conserving aquatic species. The hatchery was built in 1932 as a Works Progress Administration project, providing employment for Vernon County residents during the Great Depression. Construction was completed in 1937.

This machine was used to make fresh-water pearl buttons from mussels.

Preceding the hatchery were the Fish Rescue Stations that were established along the river by what was then known as the U.S. Fish Commission.

At the same time, Aloisi said, the U.S. Fish Commission was also working to restore freshwater mussels, which were in great demand in the late 1890s for making pearl buttons. Researchers were not able to save the pearl button industry, but their studies of the mussel species formed a strong foundation for future work. In fact, Aloisi said some of the mussel propagation work done at the hatchery today is based on the early efforts to save mussels for the button industry.

The hatchery’s intensive work on mussel propagation continues today, but now the goal is to save the mussels, not an industry. Same goes for the fish. The hatchery’s early goals were to raise bass and bluegill for stocking depleted streams in the local area and beyond. These young fish were transported by converted railroad baggage train cars that came to be known as “fish cars” to water bodies all across the country.

But eventually the hatchery’s focus shifted away from primarily replenishing commercial and sport-fishing species.

“Most of our mission now is to recover and restore threatened and endangered populations of fish and mussel,” Aloisi said. “We even raise an endangered dragonfly—the Hines Emerald Dragonfly.” 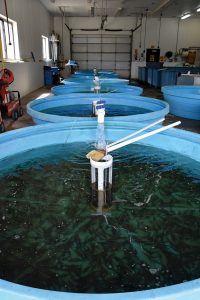 Visitors can walk through the hatchery buildings where fish and mussels are raised. These tanks hold sturgeons that will be released into lakes and streams when they reach about 8 inches in length.

The hatchery today provides 30 to 40 million fish, eggs, and mussels of over 26 species to waters all over the country, including those managed by various Midwestern tribes, with whom the hatchery shares a common goal of conserving the river ecosystem.

A special feature of this newest River Road Interpretive Center is the opportunity to see the hatchery’s work in progress. After exploring the interpretive center, visitors can walk to the hatchery culture buildings to see the some of the fish and mussels that are raised there. The hatchery operates year-round, but now is an especially good time to visit as the lake sturgeons are approaching the required size for release into lakes and streams.

Lots of fascinating stories and details about the Upper Mississippi’s history are wound through the center’s overview of river life and hatchery work. The windows at the top floor of the center overlook the hatchery, offering a spectacular view of the bluffs. Displays alongside the windows detail what’s in direct view on the other side of the glass.

One of those views includes the area where a riverboat called J.S. caught fire and sank in 1910. Although anything of value was long ago salvaged, the charred timbers of the steamer remain on the river bottom to this day. 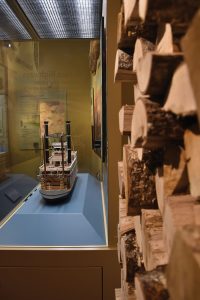 The cord of wood stacked floor to ceiling represents how much fuel an early steamboat needed to operate for just 15 minutes.

In another exhibit, a model steamboat is positioned next to a cord of wood stacked floor to ceiling, representing how much wood each riverboat needed to operate for just 15 minutes. Many of today’s river communities, placed about 8 to 10 miles apart, can trace their origins to the steamboats’ constant need for refueling.

Local history buffs will find interesting details in the museum’s archived documents as well. A search through payroll records of the employees who built the hatchery reveals earnings of just $1 a day. These records might even turn up a familiar name or two as all employees came from Vernon County.

Whatever your reason for stopping, a visit to the Great River Road Interpretive Center in Genoa is bound to be bountiful. After all, fish stories aren’t the only ones told here.