If the start of a new year has you yearning for new adventures and discoveries, we’ve got a destination to recommend—Rock River Heritage County Park, the newest addition to the Rock County Parks system.

Sprawled over 178 acres on the eastern banks of the Rock River just northwest of Janesville, and partially served by Rock Energy Cooperative, Rock River Heritage County Park opened to the public in November. This wooded enclave offers a number of amenities—both natural and man-made—for those seeking outdoor recreation. There’s the river of course, but there’s also a small man-made lake, a steel footbridge spanning a ravine, an outdoor amphitheater, multiple cabins and facilities, benches and picnic tables placed throughout, a winding road as well as walking trails that connect everything together, and wildlife of all kinds at every turn.

Although the park is a work in progress, with trails still in development and buildings expected to be open for public rental sometime in 2023, there’s already a public event on the agenda: a candlelight hike on January 21 from 6 to 8 p.m. 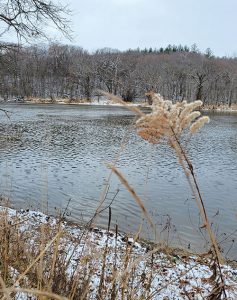 Rock River Heritage may be the newest Rock County Park, but the park’s footprint has been in place for more than six decades. It’s a former Boy Scout camp, created in 1946 and named Camp Indian Trails in a nod to Black Hawk and his Sauk tribe who are said to have camped here while on the run from the U.S. Army.

Over the years the Boy Scouts cleared trails on the property, added outdoor recreation stations, and built the necessary infrastructure such as campsites, cabins, and a dining hall with a full kitchen to create a place where generations of Boy Scouts enjoyed camping and all manner of outdoor fun.

In 2021, the Boy Scouts of America Glacier’s Edge Council indicated its plans to sell the camp and Rock County stepped up to purchase, with the goal of preserving the land and opening it up for the public to enjoy.

The county has been working on making improvements to the park since it was purchased last February. In November the county announced a “primitive” opening, with an official grand opening event planned for some time in the spring.

“Whether you’re a hiker, fisher, or simply a person who enjoys the parks, we are excited to announce the opening of the Rock River Heritage Park and while there is a lot of work yet to do, we feel that the citizens of Rock County deserve to experience this magnificent property and what it has to offer,” Rock County Parks Manager John Traynor said in a press release. 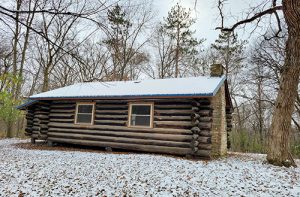 Multiple cabins are tucked inside the woods throughout Rock River Heritage Park. There’s also a dining hall and other facilities that are expected to be available to the public to rent sometime in 2023.

The former camp’s established infrastructure—with some of the many buildings having been recently fully renovated—offers great potential for the park’s future use. The buildings are not currently open, but Traynor said they will be available to the public to rent for parties and other events some time in 2023.

In the meantime, visitors are welcome to explore the property and walk along the trails, although Traynor noted that the trails are also undergoing improvement. At the moment the park’s trails reflect their original intention—that of funneling groups of Boy Scouts from one building or activity to the next.

“I would call it more of a destination trail system,” he said. “So we’re working with the Rock Trail Coalition and the Ice Age Trail Alliance and some other groups that are involved in our parks already to hopefully develop a more advanced trail system out there in the upcoming year.” 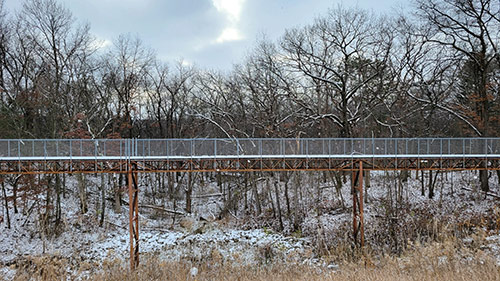 Rock River Heritage Park offers beautiful views of and access to the Rock River. It’s a great place to enjoy a winter walk in nature.

The Ice Age Trail, a 1,200-mile footpath that roughly follows the farthest advance of the glacier more than 12,000 years ago, has segments passing through and around Janesville already. The planned trails at Rock River Heritage Park will not be connected to the existing Ice Age Trail due to the park’s location in relation to the Rock River crossing points, but they would be listed as an Ice Age Trail destination, Traynor explained.

However, there’s no need to wait for further trail development to enjoy the park. The existing pathways make for pleasant winter walking or snowshoeing, and guests can enjoy waterfront views by strolling around the small lake or walking across a former athletic field right down to the Rock River’s banks.

Also, wandering around the little cabin areas and outdoor stations throughout the park leaves a sense of appreciation for the Boy Scouts of years past who created this space and made special memories here. One could say they blazed a trail for the public to follow.—Mary Erickson

Rock River Heritage Park is located at 5801 N. River Road, Janesville, 53545. It’s open from 5 a.m. to 10 p.m. Dogs are allowed but must be leashed at all times and cleaned up after. Friends of Rock County Parks are hosting a candlelight hike at the park on Saturday, January 21, from 6 to 8 p.m. Fire warming pits and treats will be available. The event is free, but a $5 per person donation is appreciated. To learn more visit https://www.co.rock.wi.us/departments/public-works-parks or follow Friends of Rock County Parks on Facebook.