We’ve had many calls for action in the Wisconsin Energy Cooperative News (WECN) over the years. Since it first rolled off the press as the Wisconsin REA News in July 1940, this publication has called upon its members to contact their legislators about issues affecting their cooperative; cast a vote in local, state, and national elections; participate in their co-op’s annual meetings; and even help fellow readers find long-lost recipes. 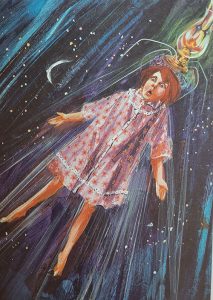 Written by Rusty Hoffland with a plot channeling Charles Dickens’ “A Christmas Carol,” this 24-page hard-covered book follows the Christmas-night journey of a little girl named Sandy, who’s sent to bed after grumbling about having to do chores. At night she receives a visit by a ghost who whisks her away to The Cold Dark Time before farms had electricity to show her how difficult life was before electric cooperatives brought power to farms like hers.

Our quest to learn more about this unique bit of Wisconsin electric co-op history began with a random email from Washington Island Electric Cooperative General Manager Robert Cornell back in January. He came across a few copies of the book in his office and sent us a picture of the cover, commenting that he remembers reading this book when he was a schoolboy, growing up on Washington Island. He recalled that the book was available in both the school and the public libraries.

We were intrigued. We weren’t familiar with the book ourselves, which surprised us a bit considering our work requires an occasional deep dive into electric cooperative history, with frequent references to our dog-eared copies of “Statewide,” a history of the association written by Michael J. Goc. But we couldn’t recall ever hearing about “Sandy and the Ghost,” and there’s no mention of it in “Statewide.”

We had to learn more. Our first move was to contact Perry Baird, who served as editor of WECN from 1987, when it was known as the Wisconsin R.E.C. News, until retiring at the end of 2013. Baird isn’t nearly old enough to have been part of the book’s publication, but he’s a human encyclopedia of Wisconsin’s rural electrification history and our go-to source for any questions regarding WECA’s past. If anyone could tell us more, he could.

So we contacted Baird to see if he’d ever heard of “Sandy and the Ghost.” He had. Of course he had. Not only had Baird heard of the book, he had a copy himself, given to him by Lloyd Spears, retired manager of Head of the Lakes Electric Cooperative (now part of East Central Energy). Baird also reminded us that he had written about the book in WECA’s internal newsletter in the 1990s soon after Spears gifted him with a copy.

However, Baird had very little information about how the book came to be despite valiant efforts to unearth some. In fact, his brief newsletter items about “Sandy and the Ghost” point out the curious lack of information.

WECA records show several thousand of the books were published; however, a search through old WECA board minutes turned up nothing in the way of discussion about the decision to commission such a book, the cost of the project, the author, or anything else. All that could be found in WECA’s extensive archives was an ad in the March 1967 issue of the Wisconsin REA News announcing that the book was ready and available for purchase through WEC’s public relations department for $1.30 each plus 30 cents postage and handling. A similar ad appeared in Contact, WEC’s weekly newsletter, about the same time. 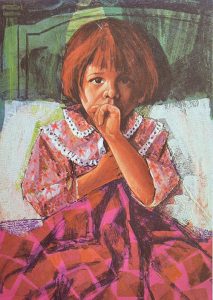 The book itself offers no other clues. It’s got a © Copyright, Wisconsin Electric Cooperative, 1967 stamp on the inside front cover, but no forward or introductory words, no author’s notes, not even a mention of the artist who created the beautiful full-color illustrations.

We thought we might be able to find more information with the tools that weren’t fully at Baird’s disposal in 1996—namely, the internet. Also, we were too eager to read the story ourselves to wait for Cornell’s eventual delivery of his copies to our office, so we searched online for the book to see what else we could learn.

We found a used copy of “Sandy and the Ghost” with no problem, but alas, not much else. A search for Rusty Hoffland turned up a similar book by the author published in 1965 by CUNA Supply Cooperative, which was formed in 1936 as an affiliate to the Credit Union National Association (CUNA). This book, called “Mike’s Big Idea,” is about a young boy who accidentally breaks his piggy bank and discovers a better way to save his money through his credit union. It seems Hoffland found a niche writing children’s books about cooperative forms of business.

An inquiry to the CUNA headquarters in Madison to see if the organization had any records of “Mike’s Big Idea” turned up empty; no one there had heard of the book, and no one found any records of it.

The only other title by Rusty Hoffland that we were able to find is “Mountain Getaways,” a travel guide of Georgia, North Carolina, and Tennessee first published in 1984. We ordered a used copy to see if there were any helpful author’s notes and learned the “Mountain Getaways” Hoffland is a Wisconsin native, but that’s about all that could link this author to the Hoffland who wrote about Sandy and Mike. It’s not impossible that the two Hofflands could be the same, but given the years between the books and the different styles of writing, it’s also not likely. 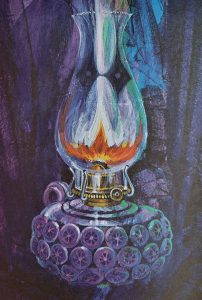 After hitting an internet dead-end, we returned to old-fashioned sleuthing. We reached out to some long-serving co-op leaders to see if they could remember anything about “Sandy and the Ghost.” Among them were Robert Kretzschmar of Bayfield Electric Cooperative and Dan Kanack of Oconto Electric Cooperative, each of whom has served his respective co-op as a director for 48 years. In addition, Kretzschmar has been a member of Bayfield Electric ever since his family’s farm first got electricity when he was 11 years old, and other than a seven-year span, Kanack is a lifelong Oconto Electric Co-op member as well. However, neither could recall ever having seen, or even heard of, “Sandy and the Ghost.”

Dan Smrekar, who has served as a director of Jackson Electric Cooperative for 46 years, said he has vague memories of seeing the book around the co-op office when he first came on the board in 1976, and he recalled that individual co-ops might have purchased the books and gifted them to area libraries. That makes sense of the stamps within the used copy we purchased online—“Property of Bellaire Elementary Library” is stamped on the inside cover, with “Compliments of Top O’ Michigan Rural Electric Company, Boyne City, Michigan” stamped on the opposite page. So evidently it wasn’t just Wisconsin electric cooperatives that purchased and distributed this book.

Marian Trescher of Rock Energy Cooperative couldn’t recall anything specific about the book either, but she did offer a little more insight. Trescher has served as a director of Rock Energy since 2004, when she was elected to fill the seat of her late husband, Howard. She was also an active co-op member and leader during Howard’s 43-year tenure on the board, plus she spent 27 years as a public school teacher. If this book was a one-time staple of school libraries, especially those in rural communities, Trescher might have come across it.

She said the book title indeed sounded familiar to her, and she also shared that it wasn’t uncommon in those days for cooperative organizations to publish children’s books to help tell their stories. She recalled a long-ago similar book published by the Grange, an agriculture advocacy group with which she and Howard were also once actively involved.

We hope some of our readers remember “Sandy and the Ghost” and can help us fill in a few gaps surrounding this unique book. If so, please email mary@weca.coop or mail your memories to Sandy and the Ghost, WECA, 222 W. Washington Ave., Suite 680, Madison, WI 53703.

We also hope all of our readers enjoy this delightful holiday story as much as we do. To read the entire story, visit the December 2022 Web Exclusive by clicking the link. May this little tale inspire all to heed the lessons of the past, present, and future, just as three Christmas spirits once did for Ebenezer Scrooge.—Mary Erickson