A lawsuit filed in Dane County by a Dubuque, Iowa-based solar energy developer seeks a judicial finding that third-party financing and ownership (3PO) of electric generation facilities is legal in Wisconsin.

Named as defendants in the suit by Eagle Point Solar are the state’s Public Service Commission (PSC) and Milwaukee-based WE Energies.

The central issue is WE Energies’ denial of grid connection for solar panels Eagle Point wants to install on municipally owned buildings in Milwaukee. Eagle Point agreed to set up generating equipment at several locations and sell the power to city government.

WE Energies maintains that because Wisconsin law does not authorize retail electric customer choice, the transaction would be illegal.

Solar interests including Eagle Point have repeatedly asked the PSC to open the door for 3PO arrangements, but developers reject the idea that by engaging in the business of selling power to consumers, they would meet the statutory definition of a public utility and come under PSC regulation. The commission has said it’s the job of the state legislature, not the unelected regulators, to say what is a regulated utility and decide whether to allow retail choice.

Dairyland Power Cooperative and Avangrid Renewables have finalized a power purchase agreement for 52 megawatts of generation capacity from a South Dakota wind farm.

The 155-megawatt Tatanka Ridge Wind Farm is proposed for construction in Deuel County, South Dakota. It would site 56 wind turbines on some 18,000 acres, according to a joint announcement from Dairyland and Avangrid Renewables, the owner-developer.

With a presence in 22 states, Portland, Oregon-based Avangrid Renewables is a primarily wind-energy subsidiary of Avangrid Inc., and is part of Spain’s Iberdrola Group. The new South Dakota facility is expected to achieve commercial operation by the end of 2020. 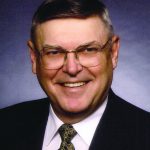 Funeral services were held May 14 at Eau Claire for Robert Gadwill, longtime director of Eau Claire Energy Cooperative, the Wisconsin Electric Cooperative Association (WECA), and Cooperative Network (CN). Aged 80, he died at home in Altoona May 8, following a November 2018 diagnosis of Amyotrophic Lateral Sclerosis (ALS).
Born at Ojibwa, Wisconsin, Gadwill was a UW-Eau Claire graduate who served 25 years in the Marine Corps including two tours in Vietnam, rose to the rank of colonel, and was qualified as a combat engineer and logistics officer.

Gadwill was first elected to the board of then-Eau Claire Electric Cooperative in 2000. In 2006 he was elected board chairman and served six years in that post. He was elected a director of both the WECA and of CN in 2009, serving in both roles through 2015. He became vice chair of the WECA board in 2012 and chairman in 2015.

Gadwill is survived by Mary, his wife of 56 years, two daughters, one son, seven grandchildren, and one great-grandchild.

Legislation remedying overcharges for insuring electric cooperative pension plans has advanced by an overwhelming bipartisan vote in the House of Representatives as part of a wide-ranging package of retirement savings reforms.

In April, co-op pension language authored by Wisconsin Congressman Ron Kind was folded into the broader SECURE (Setting Every Community Up for Retirement Enhancement) Act, H.R. 1994. Its passage on a 417–3 roll call sets the stage for Senate consideration. Assuming enactment, it would save several hundred thousand dollars for Wisconsin cooperatives in its first year of application.

Kind’s language would permanently reduce pension premiums for cooperatives and charities. The bill also makes multiple changes for retirement programs including repeal of the 70½-year age limit for contributions to individual retirement accounts, and would push back the mandatory age to begin withdrawals from IRAs and 401(k) plans to 72 from the current 70½.

The Energy Information Administration (EIA) anticipates U.S. households will consume about 5 percent less electricity this summer than during the summer of 2018. An average household is expected to use about 3,080 kilowatt-hours from June through August.

That would represent the lowest electricity consumption since 2014, the EIA, an agency of the Department of Energy, said, adding that residential consumption overall has been trending downward since 2010 in response to greater energy efficiency.

In most of the United States, electricity demand peaks during the summer because of air-conditioner use but this summer, the agency said, demand is expected to be lower because of milder projected temperatures.

At the same time, the PSC also approved agreements for half of Badger Hollow’s 300-megawatt capacity to be sold to Wisconsin Public Service Corporation and Madison Gas and Electric.

The intervenors argued that the Badger Hollow developers failed to comply with a provision of Wisconsin law that requires the use of brownfield sites for large electric generating facilities “to the extent practicable.”

Developers say they expect to begin construction of Badger Hollow later this year.