This is it. This year is the “end of the beginning” of the transition to electric vehicles (EVs), according to many industry analysts, and automakers are ready. For example, Ford announced it is doubling up on production of the F-150 Lightning, which goes on sale in limited numbers this spring. General Motors says it will have 10 EV models on car lots within two years, and Chrysler says its fleet will be exclusively electric within six years.

President Joe Biden’s goal is for 50 percent of new vehicle sales in the United States to be electric or plug-in hybrids by 2030, up from the current 3.4 percent, according to federal data.

Here’s the problem: Many consumers are still warming up to the idea of plugging in their cars.

“There is no better entity than electric cooperatives to step in and fill the gaps to help ease range anxiety so people in all
areas can consider the benefits of an electric vehicle and have a choice.”

According to the 2022 Global Automotive Consumer Study by Deloitte, which was just released in January, 69 percent of Americans still prefer a gas-fueled engine for their next vehicle, 22 percent prefer some type of hybrid, and only 5 percent are ready to go all-in with a full electric vehicle (4 percent selected “other”).

In the survey, people in the United States cited range anxiety (fear of running out of battery charge) as the number one factor preventing them from going electric. Nevertheless, Wisconsin electric cooperatives are already working to ease those concerns. It’s now been more than a year since Pierce Pepin Cooperative Services President and CEO Nate Boettcher spearheaded the effort that launched “CHARGE EV, LLC,” a co-op branded network that includes the installation of public charging stations and offers home charging units, installed, for purchase by cooperative members. 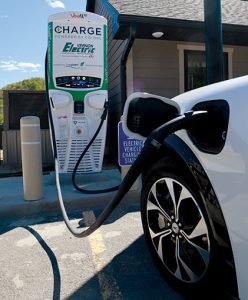 One of the first level-3 fast-charging stations in rural Wisconsin was this one installed at Kickapoo Creekside, a popular restaurant stop at the intersection of Highways 14, 61, and 131 in Readstown, in Vernon Electric Cooperative’s territory.

The CHARGE network launched in December of 2020 with a group of 29 electric co-ops, including a few in Illinois, Iowa, and Minnesota, and the rest in Wisconsin, with the goal of becoming a national cooperative effort. In just one year, the initiative has doubled in size and now includes 49 participating cooperatives. And this is key since the transition to EVs is lagging in rural areas, prompting concerns that, as with electrification and broadband, rural America will be left behind in the opportunity to own EVs due to lack of charging stations.

“There is no better entity than electric cooperatives to step in and fill the gaps to help ease range anxiety so people in all areas can consider the benefits of an electric vehicle and have a choice,” Boettcher said.

One of those benefits is lower cost to “fuel,” especially for those who mainly charge their EV at home. Home charging allows for maximum savings compared to public charging stations, similar to how it is cheaper to eat meals at home than it is to dine out.

Through CHARGE, which all Wisconsin electric cooperatives participate in, members have the opportunity to choose from three levels of smart home chargers, ranging in cost from $900 to $1,400. All have the ability to communicate with the owner, allow for the special rates, and in the future will allow for energy to be pushed back to the grid. Some co-ops offer rebates to help with the initial costs of home chargers. For example, Pierce Pepin offers rebates ranging from $400 to $800 on residential charging stations. In addition, members can cut more costs by charging during “off-peak” hours, such as overnight. In the Deloitte survey, of the people who said they would not charge their vehicle at home, more than 60 percent said the cost of installing a charger is too much, or they were not sure how to do it. 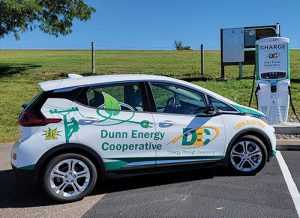 The cost of driving an EV compared to a gas-fueled vehicle varies depending on where you live and what model you drive. According to an analysis by the Wall Street Journal, which looked at a sample of cities across the country, a driver of the Ford Mach-E living in Madison, Wisconsin, and charging mainly at home will save an average of $588 per year on fuel costs.

In the Deloitte survey, U.S. consumers said to consider the purchase of an electric vehicle, they would expect it to run 518 miles on a single charge. That exceeds what most EVs can do (200 to 350 miles is typical for newer EVs). However, most gas-fueled vehicles don’t meet that goal either. At an average of 25 miles per gallon, a car would need a 21-gallon tank to go 518 miles. Most cars have gas tanks that hold 12 to 16 gallons of fuel, which means they run 300 to 400 miles on a single tank, on average.

To help ease concerns about range anxiety in rural areas of Wisconsin, the CHARGE website (Charge.coop) includes a map of charging stations that are well-positioned between Wisconsin’s less populated cities to help drivers feel assured that they will get to where they are going. Many of the cooperative CHARGE stations are currently free. 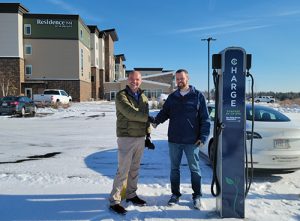 The Residence Inn in Eau Claire is one of two hotels that was recently provided with a Level 2 charger by Eau Claire Energy Cooperative. Pictured here are Adam Westaby, Eau Claire Energy’s member services associate (right), and Chuck Langland, general manager of Residence Inn. The co-op will soon be providing similar chargers to two more hotels/resorts and a nature reserve.

Electric vehicles are at the forefront of the effort to limit the effects of climate change, as the transportation industry is currently the biggest polluter (surpassing the energy industry in 2017). Princeton’s Net Zero America study includes a detailed pathway to reaching net-zero emissions by 2050. Its scenarios require Wisconsin drivers to transition to 2.3 million to 4.2 million electric vehicles on the road by 2040, less than 20 years from now. That seems monumental, as the latest figures from the Department of Transportation show only 7,521 EVs registered in Wisconsin as of mid-2021.

But as much as that seems like a long shot, Americans have transitioned to new technology in rapid form before. Just 20 short years ago, most of us were still using a landline. As of 2000, only one in four Americans had a cell phone. The very first Apple iPhone was introduced in 2007, just 15 years ago. Currently, 97 percent of American adults have a cell phone, including 100 percent of those ages 18-49, according to Pew Research.

As of this writing, the Biden Administration’s “Build Back Better” plan, which includes electric vehicle buyer incentives, remains stalled in the Senate. However, analysts remain convinced the era of the electric vehicle is here—or at least, it’s close—as public perception shifts from novelty to mainstream, due to advancements in charging technology, reduced manufacturing costs, extended range capabilities, an increase in available EV models, greater selection of affordable EVs, and an ever-growing charging infrastructure landscape thanks to forward-thinking, innovative programs such as CHARGE.