It’s been almost 150 years since a deadly fire swept through 1.3 million acres of northeast Wisconsin, wiping out 17 towns in its path, including the one for whom the fire is named. The Peshtigo Fire of October 8, 1871, stands as the most devastating wildfire in American history, having claimed anywhere from 1,500 to 2,400 lives. That includes about 800—close to half the community’s population at the time—in Peshtigo alone.

Although often overshadowed by the Great Chicago Fire that began on the same day, the far deadlier Peshtigo Fire is a familiar story to most everyone who did their primary schooling in Wisconsin, where the blaze is a memorable lesson in the typical fourth-grade social studies curriculum. This is when most Wisconsin students first learn about the terrible toll the fire took in human life and property destruction, calculated not just in numbers but also through haunting survivor accounts that have been carefully preserved.

However, there’s no need to dig out an old social studies book to brush up on Peshtigo Fire knowledge ahead of this major anniversary. Historical records, including survivor stories and newspaper accounts of the day, are cataloged and available for viewing through the Wisconsin Historical Society. Even better, some of this history can be experienced firsthand on a visit to Peshtigo, where the community’s unique heritage is marked and preserved throughout the city. 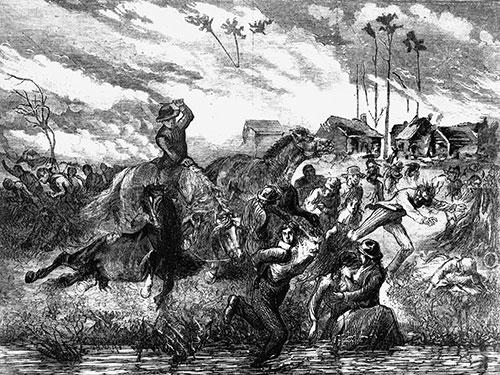 This drawing by G.J. Tisdale of people seeking refuge from the fire in the Peshtigo River originally appeared in Harper’s Weekly in 1871. (Wisconsin Historical Society, WHS-3728)

The Peshtigo Fire Museum, maintained and staffed by the Peshtigo Historical Society, is filled with artifacts and historical records relating to life in Peshtigo at the time of the fire as well as the fire itself. In addition, the building is a piece of living history all its own; the museum is housed in the first church that was rebuilt in Peshtigo after the fire, on the site of the Catholic Church whose loss in the fire was recorded in Father Peter Pernin’s published eyewitness account.

At the adjacent Peshtigo Fire Cemetery, many of the fire victims’ gravestones are marked with corresponding stories about the people who are buried there. The cemetery also includes a mass grave for 350 victims of the fire who could not be identified, and it contains the first official Wisconsin state historical marker, erected in 1951.

The Peshtigo River, which provided some of the only safe refuge for the hundreds of people who ran to escape the fast-moving flames on that terrifying night in 1871, crosses through the heart of the community. A marker at the northeast end of the Peshtigo River Bridge pays tribute to the waterway that protected some of Peshtigo’s citizens during the fire. 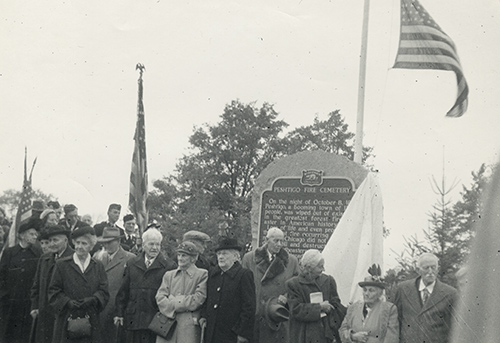 A Confluence of Causes The story of the Peshtigo Fire has been gleaned from survivor accounts and research into the contributing factors, much of which is told at the museum. There, visitors learn that multiple factors combined to create conditions that were ripe for a devastating forest fire.

Mother Nature certainly played a role, delivering an unusually dry summer in 1871 to follow up a dry fall and winter. Also, a cold front moved across north-central America on October 8, bringing swirling winds described by some witnesses as a tornado that served to whip smaller flames together and create a firestorm.

But humans played a significant role themselves. Fires were frequently used as a method of clearing debris in a number of industries of the day, from lumber to farming to railroad construction. Many of these fires were left to die on their own, sometimes burning underground and weakening trees and other vegetation. Pernin recalled in his published account numerous fires that burned in the area in the days leading up to October 8, turning the sky dense with smoke. While alarming to many, this was still evidently a common enough occurrence that it failed to trigger a widescale sense of alarm. 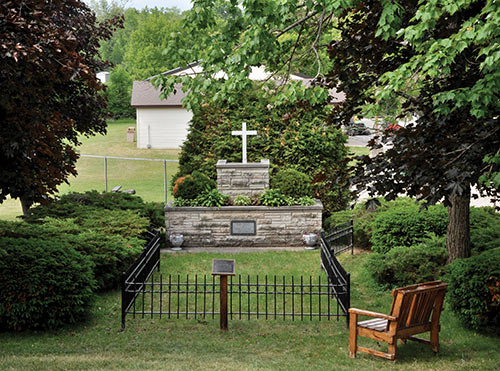 The cemetery also includes a mass grave of 350 victims of the Peshtigo Fire who could not be identified.

Also, a stroll through the museum reveals another contributing factor to the fire’s rapid spread: The vast bulk of the community was made of wood. Like many other towns in northern Wisconsin, Peshtigo was a thriving lumber community in the mid-1800s thanks to the thick surrounding forests.

In 1871 Peshtigo had the largest woodenware factory in the world and was home to one of the country’s biggest sawmills. Homes, businesses, and even sidewalks were made of wood. Combined with the prolonged drought conditions, near-constant simmering ground fires, and high winds that stirred everything up, the dry wood throughout the city helped turn Peshtigo into a tinder box that early October night.

A Night of Terror When the fire reared up in the evening hours of October 8, carried along by the strong winds, it did so suddenly and ferociously. Survivors described the noise of the rapidly moving fire as “the roar of an approaching train.” 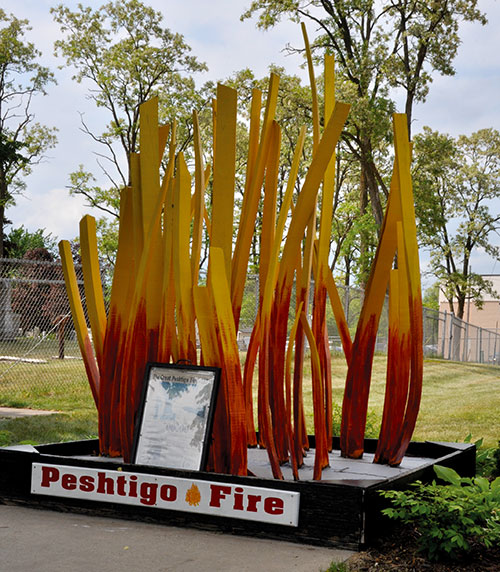 This sculpture is installed outside the Peshtigo Fire Museum.

An historical account in a 1921 issue of The Peshtigo Times, available to read through the Wisconsin Historical Society, described a nightmarish scene: “And now, at about 10 o’cock, great tongues of flames were seen leaping high in the air above the tree-tops and rapidly approaching the village. The roar increased and burning coals began to drop in the village, first like stray meteors of the night, and than (sic) as thickly as the snows of winter. The few remaining survivors say that the shower of coals was as dense as a heavy snowstorm. In less time than it takes to write it, the wind reached the force of a tornado, the buildings nearest the woods were on fire, and the very air seemed an atmosphere of flames.”

People rushed to find safety where they could, many of them in the Peshtigo River, where the survivors remained until daylight. The Peshtigo Times article describes a vivid scene: “Some were standing in the cold water of the river, or clinging to logs, sometimes the logs on fire, men, women, children, grasping for breath, their eyes blinded by smoke, and trying to save themselves from burning even in the water only by covering their heads with wet blankets, or constantly wetting their heads. The roar of the tornado and of the fire was mingled with shrieks of anguish from the suffering, and groans and lamentations from those bereaved of relatives and friends. Cattle, too, rushed into the river and swam about bewildered sometimes rolling over the logs to which human beings were clinging, and sending them to a watery grave.” 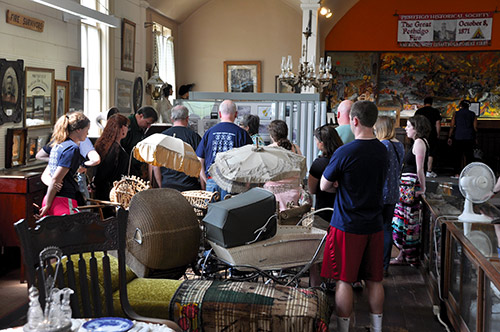 Museum workers are always available to share the story of the Peshtigo Fire inside the museum. Groups of 10 or more can arrange for a guided tour.

Individual survivor stories are preserved at the Peshtigo Fire Museum and available to read on the museum’s website. Some are heroic; most are heart-breaking.

Destruction and Reconstruction The damage from the Peshtigo Fire was severe and widespread. Peshtigo was the hardest hit, but the fire scorched a wide swath, skipping over Green Bay to burn in Door and Kewaunee counties as well. The fire ultimately burned 2,400 square miles and destroyed 2 billion trees. It was finally quenched by rain and decreasing winds the next day and stopped as it reached Lake Michigan.

In his published account, Father Pernin recalled the scene he was met with when he returned to Peshtigo after taking refuge across the river in Marinette: “Of the houses, trees, fences that I had looked on three days ago nothing whatever remained, save a few blackened posts still standing as if to attest the impetuous fury of the fiery element that had thus destroyed all before it. Wherever the foot chanced to fall it rested on ashes.”

Peshtigo’s story, however, is not all as heartrending as the one Pernin tells. This is also a story of resilience. This city was rebuilt from—quite literally—those ashes of 150 years ago.—Mary Erickson (Sources: Peshtigo Historical Society, Wisconsin Historical Society)

The Peshtigo Fire Museum is located at 400 Oconto Avenue in Peshtigo. It’s open from 10 a.m. to 4 p.m. from Memorial Day through October 8. Donations are appreciated. To learn more visit peshtigofiremuseum.com or call 715-582-3244.

NOTE: COVID mitigation measures including masks are required within the museum.