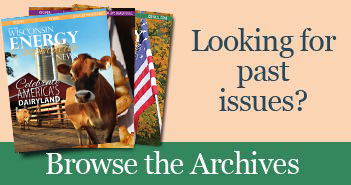 Find my co-op or Covid

We Salute our Lineworkers!

In recognition of Lineworker Appreciation Day, which falls this year on April 11, the Wisconsin Energy Cooperative News devotes its April cover each year to those cooperative employees who keep

A New Look at Nuclear Power

Before Brent Ridge landed at Dairyland Power Cooperative as the new president and CEO in July of 2020, he spent 17 years at Energy Northwest in Washington State, which provides

Looking out over the sweeping vista from the back of the David R. Obey Ice Age Interpretive Center in the Chippewa Valley, with rolling grassland leading out to a shimmering

Rural Communities Depend on Co-op Voters

“Are you ready for a war?!” Some may recall this line from the 1995 movie Braveheart, in which Mel Gibson’s character William Wallace leads an uprising of 13th-century Scottish highlanders